The highest-paid video game tournament in history took place on Sunday and, with growing sponsorship and deals to stream it to ESPN, public competitions are becoming more mainstream. But why? Russell Palmer watched the event and reports on the drama and intensity of The International 6.

As ten young men prepare to take on their opponents in the biggest tournament of their lives, thousands of spectators wait and watch.

Between them they have played millions of matches to make it to the grand finals at a fully packed Key Arena in Seattle.

In a week when the Rio Olympics are taking place, hundreds of thousands more fans were sitting at home or in bars, cheering for their favourite team as matches of a different kind - computer game Dota 2 - livestreamed to their television or computer. 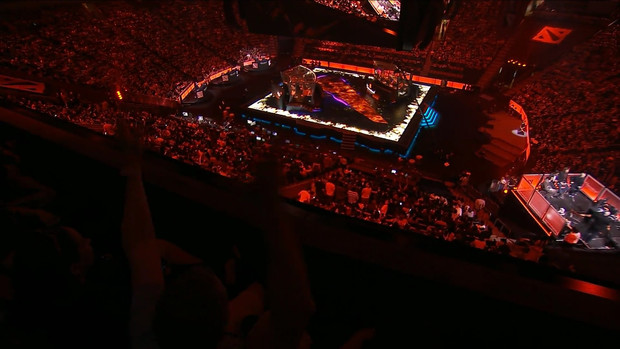 The crowd at Key Arena, which can hold more than 17,400 people, was lively and raucous. Photo: Screenshot / Twitch.com

- Watch the final day of The International 6 here

At a tournament with a prize pool of $20,770,460, they were aiming to take first place, winning more than $US9 million for the team and more importantly take home the trophy and the prestige of being the world's best.

A full orchestra welcomes them to what could very well be the series of their lives - a best-of-five match against upper-bracket winners Wings Gaming. 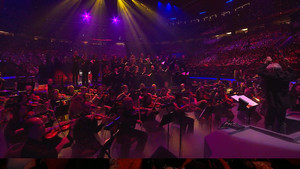 The orchestra plays music from the game ahead of the grand final confrontation. Photo: Screenshot / Twitch.com

From the analysts' box, tournament MC Paul "ReDeYe" Chaloner booms the teams' names into his microphone. 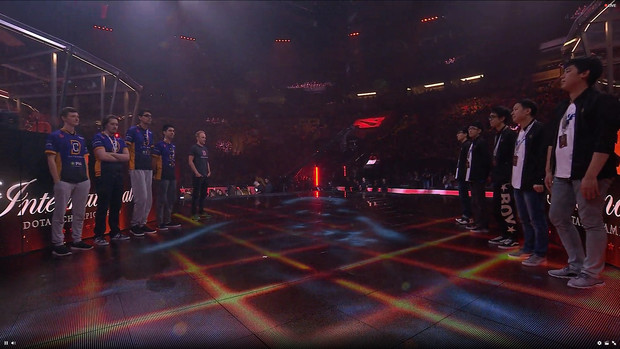 The players from Digital Chaos and Wings face each other before entering the soundproof booths. Photo: Screenshot / Twitch.com

The roar of the crowd is overwhelming. Then the voices change to what sounds like booing - but is in fact mooing, a rallying cry for DC's US player David "Moo" Hull.

Moo and his teammates step into the arena.

They had been called the 'team of rejects', many having been replaced when playing in other teams.

For their part, Wings had not yet lost a series, winning all their matches except one in the best-of-three series that dropped DC to the elimination bracket. 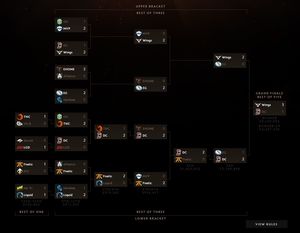 The upper and lower bracket of the tournament. Photo: Dota 2

Wings are also renowned for being able to play nearly all the heroes and having unpredictable drafts which they somehow make work.

It's the underdog story versus the versatile, inventive masters of their game, a classic David and Goliath showdown.

DC and Wings enter their soundproofed booths, which will prevent them hearing about their opponents' strategies from the commentators.

Sitting before their computers, the teams begin the drafting process - choosing which characters, or "heroes" their players will use in the first match. 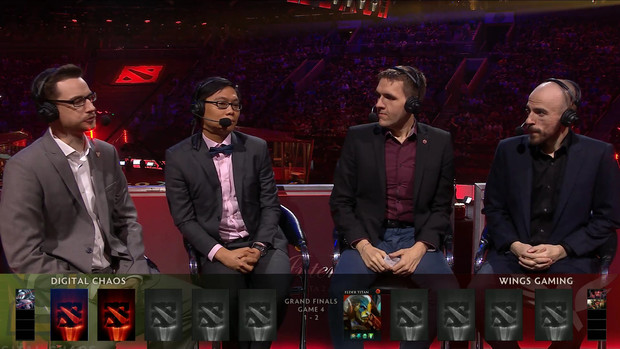 A group of analysts help viewers understand how the teams' drafts can be expected to affect the game.. Photo: Screenshot / Twitch.com

This is extremely important. During a back-and-forth process lasting roughly 10 minutes, the captains prevent their opponents from choosing five heroes, and choose five others for their own team. 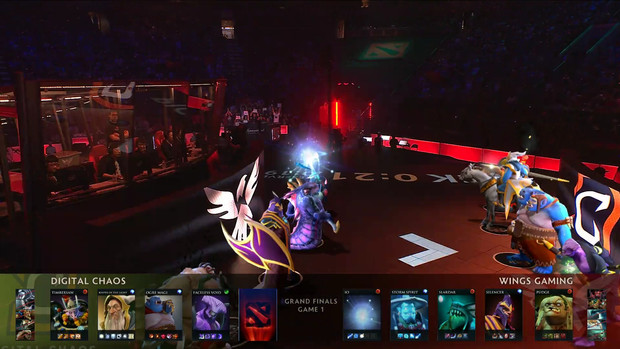 Augmented reality technology like that seen in Pokemon Go is used to give those watching at home and on the big screens at the arena a little extra excitement during the all-important drafting stage. Photo: Screenshot / Twitch.com

It's now more difficult than ever, with the current version of the game being so fine-tuned that only six of the 111 heroes have not been picked or banned - and therefore considered viable - in the tournament so far.

With English-speaking commentary provided by Toby "TobiWan" Dawson and Ben "Merlini" Wu, and commentary in several other languages as well, the fans watch 33 minutes of high-intensity battle. 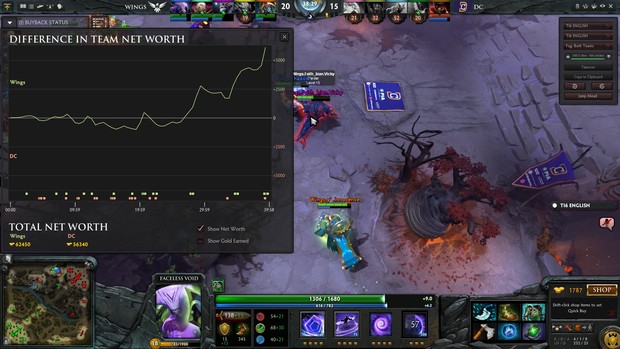 Spectators watch the match, with graphs comparing the power of each team as it happens. Photo: Screenshot / Twitch.com

DC defeat their opponents' heroes too many times, making their way into Wings' base to destroy their main building, winning the first match.

The analysts talk and examine what went wrong for Wings, what went well for DC, and how the match played out. 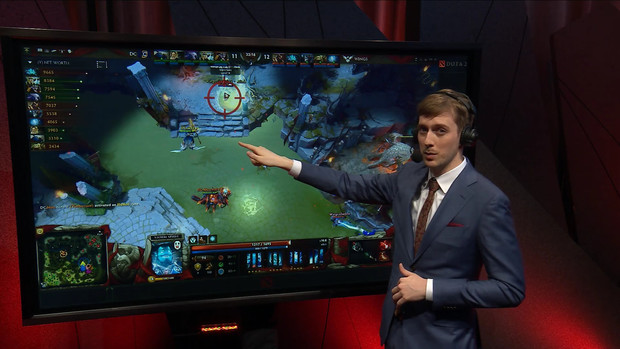 Kevin "Purge" Godec, regarded as one of the Dota 2 scene's most knowledgable analysts, breaks down aspects of the match into minute detail. Photo: Screenshot / Twitch.com

Then drafting for the second match begins. While DC strategise towards being able to take big team fights, Wings manage to avoid too many big engagements until they're more powerful, then use superior positioning to avoid getting caught out by DC's combo. It's a Wings win.

Now with an even number of wins, DC pick some of their favourite heroes to play - but again Wings' draft and play is too strong, and Wings picks up another win in a 40-minute game. 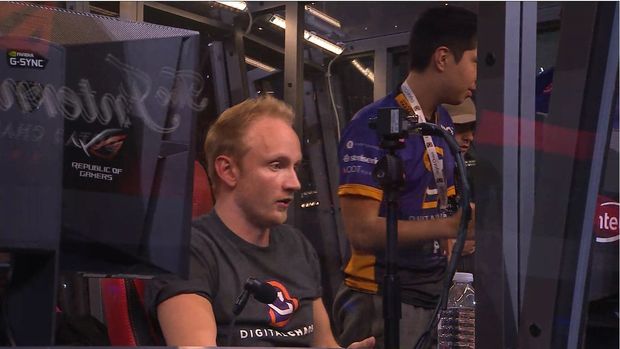 It's all come down to this. What could end up being the final match of the final series of what is now the highest-paying esports tournament in history. 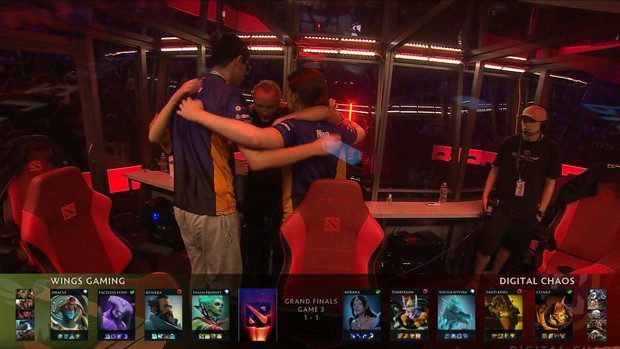 Team DC huddle up ahead of the fourth match, knowing a loss here would mean second place, and a win would mean one last hurrah. Photo: Screenshot / Twitch.com

Perhaps the pressure got to them. Maybe the draft could have gone better. Or maybe Wings were just too good - after a fairly strong early game from DC, Wings came back in the mid-game and DC's heroes were destroyed again and again. It was over.

"It's not even been a full year since these guys got together and already they are champions," Mr Chaloner tells the viewers

The plucky underdogs had been defeated, but for Wings it was the vindication they had been looking for.

Wings captain Innocence, through a translator, talks to Mr Chaloner.

"It means a lot for us to have all our fans cheering for us, they're like our second parents," he says. 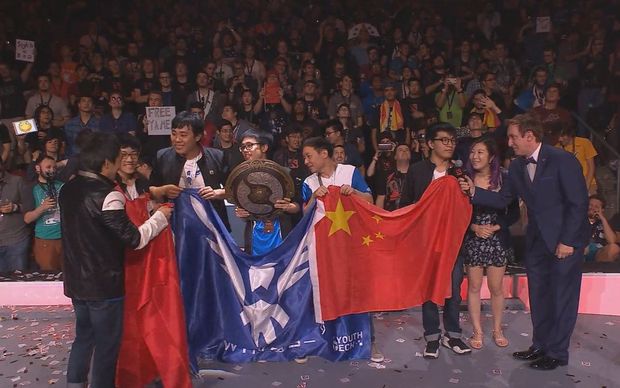 Indeed, while it's heartache for the fans of DC, it's only three months until the next major, and while many go home with fuller pockets and happy sponsors the coming months likely mean team reshuffles across the board.