Refugee and asylum-seeker children are being relentlessly bullied and subjected to racial vilification in local schools on Nauru, an Australian consultant to the Nauruan government says. 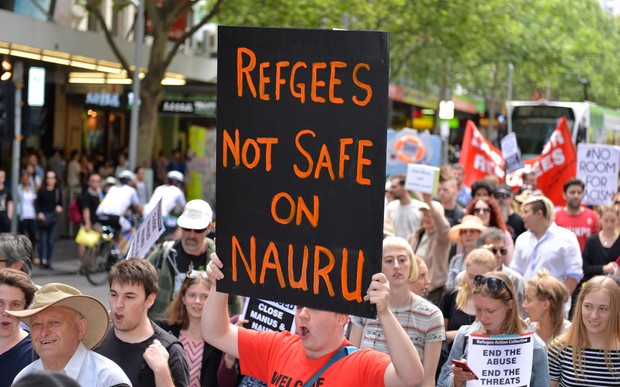 Australians protest against their country's policy of sending asylum-seekers to Nauru and other offshore locations (file) Photo: AFP

Jason Ross, an education adviser from Save The Children, recently returned from Nauru where he was hired by the government to devise an anti-bullying campaign in two local schools.

He said the problem was so bad that 85 percent of children refused to attend school.

Currently, there are about 50 asylum-seeker children in the Nauruan detention centre who attend community schools, as well as another 80 or so refugee children.

Mr Ross told the ABC he noted a sharp drop in attendance for asylum-seeker and refugee children when required to attend schools outside of the detention centre.

"Prior to those children attending [community] schools in Nauru, they were attending the school in the detention centre, and we were getting above 90 percent attendance rate," he said.

Since moving to schools outside of the detention centres, Mr Ross said: "We've seen a significant drop [in attendance] and I would estimate that to be around 15 percent."

Mr Ross, who was working in Nauru for six months from November last year until May, said that the asylum-seeker and refugee children were often subjected to cruel experiences and accusations of being terrorists.

"There was lots of name-calling, lots of local children would refer to them as 'terrorists'," Mr Ross said, adding that comments were overheard along the lines of "go back to your own country, you don't belong here, go back and make your bombs".

"So those children, you've got to understand they're incredibly young [and] they just found that incredibly disheartening and felt alienated and not connected to the school community."

A spokesperson for the Australian Immigration Department responded that "education services are a matter for the government of Nauru" and that "Save The Children have had no involvement with services on Nauru since their contract to provide welfare services expired in October 2015".

"However, Australia provides substantial assistance to the Department of Education on Nauru through various quality education program initiatives," the spokesperson said.

"This government has worked hard to restore security at the border, integrity to our immigration program and the removal of over 8000 children from detention that were put there by Labor's failed border protection policy."

But Mr Ross has maintained that he personally "did see bullying and harassment of all of the refugee and asylum seeker children".

"I would see some of the - particularly the older boys - coming and just hitting the asylum-seeker and refugee children, grabbing their bags, calling them names, teasing them," he said.

"And as a result, these children felt unsafe in the schools and consequently, I think, that's one of the main reasons why they're no longer attending the schools."

Mr Ross told the ABC that rather than attending school, many of the children opted to simply stay home, noting the destructive consequences that accompany a lack of education.

"So this is what really is concerning me: some of those children have now been absent from school for close to 12 months," he said.

"And we know the devastating long-term effects that has on a child."