Two attackers killed a priest with a blade and seriously wounded another hostage in a church in northern France on Tuesday before being shot dead by French police.

There were no immediate details on the identity or motives of the two assailants but the investigation was handed to the anti-terrorist unit of the Paris prosecutor's office.

A police source said it appeared that the priest had his throat slit.

"At one point, the two assailants came out of the church and that's when they were killed by the BRI elite force," Interior Ministry spokesman Pierre-Henry Brandet told France Info radio, referring to France's specialised police group.

The area has been cordoned off and police have told people to stay away. 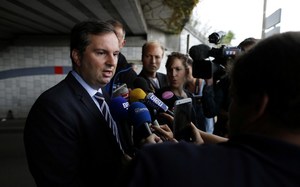 Prime Minister Manuel Valls branded the attack "barbaric" and said it was a blow to all Catholics and the whole of France.

President Francois Hollande and Interior Minister Bernard Cazeneuve are on their way to the town to be briefed by police.

The attack is the latest in a string of deadly assaults in Europe.

Interior Ministry spokesman Brandet confirmed one of the hostages had been killed and said another was critical.