The teenage gunman who killed nine people in Munich on Friday had been planning his attack for a year, German authorities say.

David Ali Sonboly, 18, who killed himself after the attack, had a Glock pistol that police believes he may have bought on the so-called dark net. 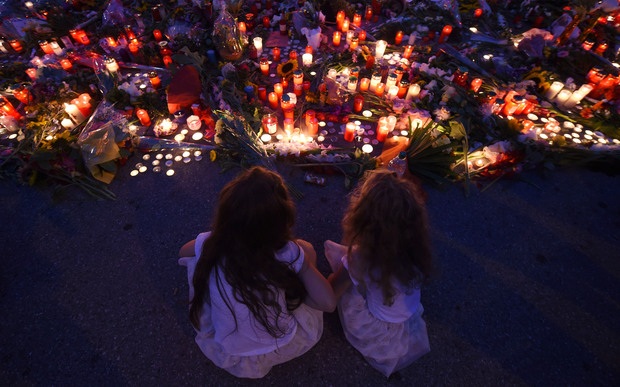 Meanwhile police in Munich have announced the arrest of a 16-year-old friend of the attacker.

They said he was under investigation for not reporting Sonboly's plans.

Some reports said he may have played a role in the Facebook post inviting people to meet at the fast food restaurant where the shooting began.

Seven of the dead were teenagers - two Turks, two Germans, a Hungarian, a Greek and a Kosovan.

A further 35 people were injured, but only four of them have bullet wounds - many were hit fleeing the scene.

The state government officials told a news conference that the victims of the attack had not been specifically targeted and were not classmates of the gunman.

Also they did not include three youths allegedly involved in bullying Sonboly when he was at school.

Robert Heimberger, head of Bavaria's criminal police, said the gunman had been planning the attack since he paid a visit last year to the town of Winnenden - the scene of a previous school shooting in 2009 - and took photographs.

He said it was likely the Glock pistol - which had been reactivated - was bought on the "dark net" market, an area accessible only with the use of special software. It had been a theatre prop. 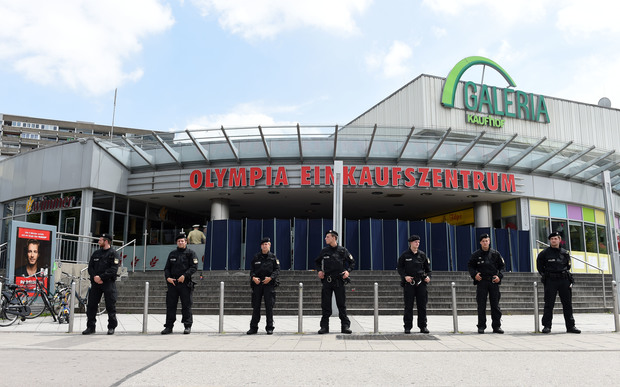 Policemen stand in front of the Olympia-Einkaufszentrum shopping centre in Munich one day after the attack. Photo: AFP

Sonboly was said to be a keen player of "first-person shooter" video games.

Mr Heimberger added that the parents of the gunman remained in shock and were not able to be interviewed.

He also said police had not found the manifesto of Norwegian mass killer Anders Behring Breivik when they searched the gunman's room at his parents' flat.

A day earlier, officials had raised the possibility of a link to Breivik, whose own attack was carried out five years earlier to the day.

As to Sonboly's state of mind, a spokesman for the Munich prosecutors' office told the news conference that the gunman had spent two months as an inpatient at a mental care facility in 2015 and was afterwards treated as an outpatient.

"The suspect had fears of contact with others" and also depression, Thomas Steinkraus-Koch said.

However, there was no evidence of any political motivation.

Senior German politicians have called for tighter controls on the sale of guns in the wake of the shooting at the Olympia shopping centre.

Munich's police chief has urged the media to respect the privacy of those affected by the attack on Monday, when schools reopen.