Witnesses in Turkey say military tanks have opened fire around the Turkish parliament building in the capital of Ankara.

Turkey's military claims to have seized power, but the country's prime minister said the attempted coup would be put down.

Gunfire has been heard at Ataturk airport in Istanbul.

A loud explosion was heard in the Turkish capital Ankara early, Reuters witnesses at the scene said.

Broadcaster NTV reported that Turkish fighter jets brought down a helicopter used by plotters in a coup attempt.

The armed forces had taken power in the country to protect the democratic order and to maintain human rights, the military said in a statement sent by email and reported on Turkish TV channels.

All of Turkey's existing foreign relations would be maintained and the rule of law would remain the priority, it said.

The state-run Anadolu news agency said the chief of Turkey's military staff was among people taken "hostage" in the capital Ankara. CNN Turk also reported that hostages were being held at the military headquarters.

If successful, the overthrow of President Tayyip Erdogan, who has ruled Turkey since 2003, would amount to one of the biggest shifts in power in the Middle East in years.

Prime Minister Binali Yildirim said the elected government remained in office. There was no immediate word from Mr Erdogan, but the Turkish sister channel of CNN said he was safe.

Turkey, a NATO member with the second biggest military in the Western alliance, is one of the most important allies of the United States in the fight against Islamic State.

It is a principal backer of opponents of Syrian President Bashar al-Assad in that country's civil war, and host to two million Syrian refugees. 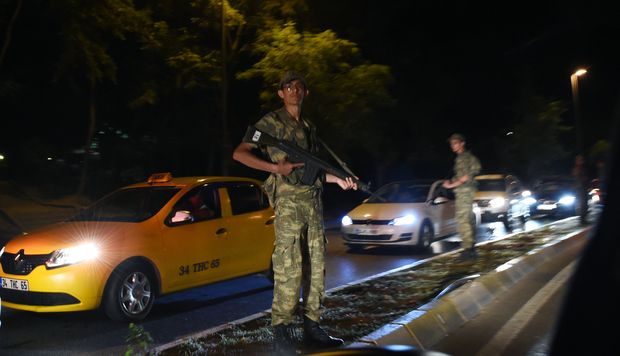 A Turkish security officer on guard in Istanbul during a security shutdown of the Bosphorus Bridge. Photo: AFP

The country has been at war with Kurdish separatists, and has suffered numerous bombing and shooting attacks this year, including an attack two weeks ago by Islamists at Istanbul's main airport that killed more than 40 people.

After serving as prime minister from 2003, Mr Erdogan was elected president in 2014 with plans to alter the constitution to give the previously ceremonial presidency far greater executive powers.

His AK Party, with roots in Islamism, has long had a strained relationship with the military and nationalists in a state that was founded on secularist principles after World War One, and which has a history of military coups. 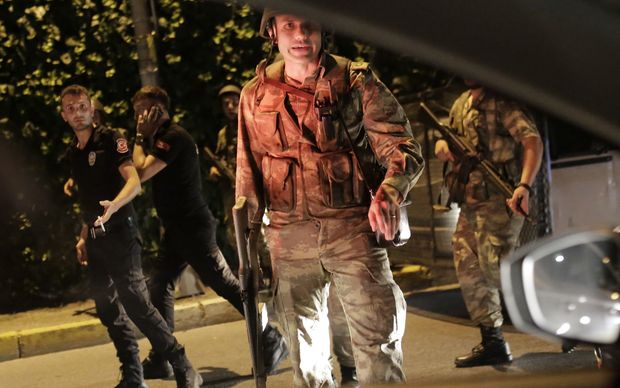 Mr Yildirim said a group within Turkey's military had attempted to overthrow the government and security forces have been called in to "do what is necessary".

"Some people illegally undertook an illegal action outside of the chain of command," Mr Yildirim said in comments broadcast by private channel NTV.

Just got asked to leave work (the state broadcaster) by about 40 or 50 armed soldiers. They took our phones. #istanbul

Those behind the attempted coup would pay the highest price, he added.

A Turkish official who did not want to be named said soldiers had been deployed in other cities in Turkey, but did not specify which ones.

Dogan News Agency reported the national police directorate had summoned all police to duty in Ankara.