The investigation into the head-on train crash in southern Italy that killed 27 people is focusing is focusing on outdated alert systems and human error. 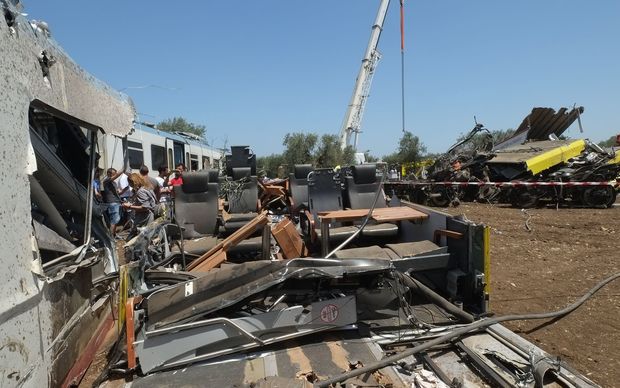 The scene of the deadly head-on train collision in southern Italy that has killed at least 27 people. Photo: AFP

Officials are looking into one of the black boxes recovered at the scene of the collision on a remote single-track line north of the city of Bari.

The system relied on telephone calls and "human error" remains the main line of inquiry, according to reports in the Italian Media.

Dozens of rescue workers are still searching the wreckage, and the inquiry is focusing on the lack of automatic signalling system on a small part of the Italian railway network. 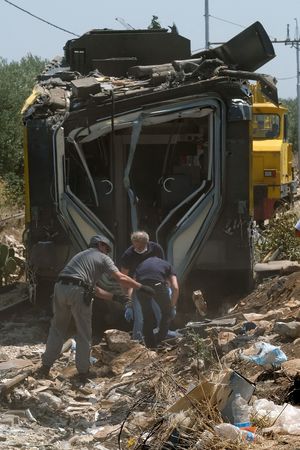 The stretch of track between the towns of Andria and Corato in the southern region of Apulia where the crash happened did not have an automatic alert or brake system.

It relies on station masters phoning one another to advise of trains running on the single track.

The Associated Press news agency has quoted railway police Commander Giancarlo Conticchio as saying: "Surely one of the two trains shouldn't have been there".

"And surely there was an error. We need to determine the cause of the error," he said.

The collision took place in good weather at 11.30am (local time) as the trains were travelling at high speed between the towns of Bari and Barletta.

Both trains had four carriages. 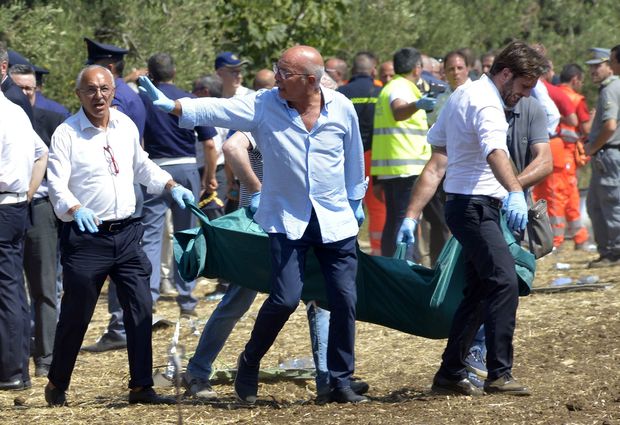 Rescuers carry away bodies after the fatal crash. Photo: AFP

Local officials said it was difficult to say how many people were on board the train at the time as there was no list.

Fifteen people are being treated in hospital for their injuries, and some of them remain in a critical condition.

Most passengers had no warning of the impending disaster which one witness compared to a plane crash.

One woman, eight months pregnant, described the moment of impact,.

"I was thrown forward, I don't know what happened, it all happened so quickly.

"I saw my mother on the ground, my father and my sister bleeding. The people on the train helped us."

One elderly man said he was knocked to the ground, while his wife described how she came across body parts as she freed him.

"I went to my husband screaming. I pulled him by the legs and feet. I climbed past people in pieces, how sad. There was nothing I could do."'

Cranes and heavy lifting equipment have been clearing the wreckage and the army is helping the operation.

Relatives of the victims are going to the mortuary in Bari to help to identify the dead.

He described the death toll as unacceptable.