North Korea fired a ballistic missile from a submarine on Saturday but it appears to have failed soon after launch, South Korea's military says. 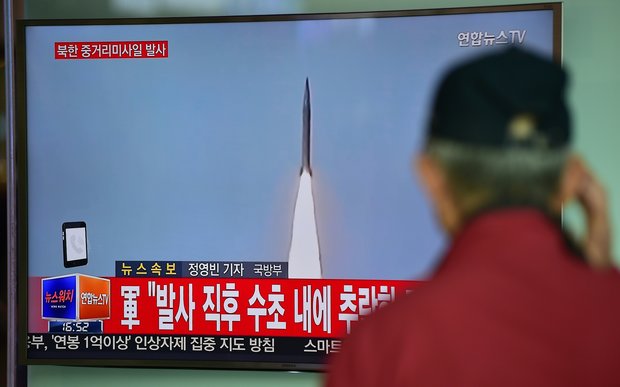 The launch comes at the end of a week of sharply rising tensions on the peninsula.

It is only a day after the US and South Korea pledged to deploy an advanced anti-missile system to counter threats from Pyongyang, and two days after North Korea warned it was planning its toughest response to what it deemed a "declaration of war" by the United States.

The South's Office of the Joint Chiefs of Staff said in a statement that the missile was launched at about 11.30am Seoul time in waters east of the Korean peninsula.

The missile was likely fired from a submarine as planned but appears to have failed in the early stage of flight, the Joint Chiefs said.

South Korea's Yonhap news agency said the missile's engine successfully ignited but the projectile soon exploded in mid-air at a height of about 10km, and covered not more than a few kilometres across the water.

The South's military declined to confirm those details citing its policy of not publicly commenting on intelligence matters.

The missile was detected in the sea southeast of the North Korean city of Sinpo, South Korea's military said. Satellite images indicate Pyongyang is actively trying to develop its submarine-launched ballistic missile programme in this area, according to experts.

The US Strategic Command, whose mission is to detect and prevent strategic attacks against the United States and its allies, said it had detected what it believed was a KN-11 submarine-launched ballistic missile (SLBM).

It was fired from North Korea's east coast port of Sinpo and then fell into the sea between there and Japan, the command said in a statement.

Reclusive North Korea and the rich, democratic South are technically still at war because their 1950-53 conflict ended in an armistice, not a peace treaty. The North regularly threatens to destroy the Japan, South Korea and the South's main ally, the United States.

"We should strongly condemn the launch by working with the international community," Mr Abe told reporters.

The US said it was monitoring and assessing the situation in close coordination with its regional allies and partners.

"We strongly condemn North Korea's missile test in violation of UN Security Council Resolutions, which explicitly prohibit North Korea's use of ballistic missile technology," said Gabrielle Price, spokeswoman for the Bureau of East Asian and Pacific Affairs at the US Department of State.

"These actions, and North Korea's continued pursuit of ballistic missile and nuclear weapons capabilities, pose a significant threat to the United States, our allies, and to the stability of the greater Asia-Pacific," she added.

The North has conducted a string of military tests that began in January with its fourth nuclear test and included the launch of a long-range rocket the following month.

The UN Security Council imposed harsh new sanctions on the country in March for its nuclear test and rocket launch.

North Korea rejects the sanctions as infringement of its sovereignty and its right to space exploration.

Late last month, North Korea launched what appeared to be an intermediate-range missile to a high altitude before it plunged into the sea after covering 400km in the direction of Japan, South Korean military officials said. That was widely seen as a technological advance for the isolated state after several test failures.

South Korea and the United States said on Friday they would deploy the Terminal High Altitude Area Defense (THAAD) anti-missile system with the US military in South Korea to counter the threat from nuclear-armed North Korea, drawing a sharp and swift protest from neighbouring China, Pyongyang's sole major ally.

Pyongyang last conducted a test of a submarine-launched ballistic missile (SLBM) in April, calling it a "great success" that provided "one more means for powerful nuclear attack," although it had not had a successful SLBM test flight.

A report on 38 North, a website run by the US -Korea Institute at Johns Hopkins University in the US, said in May that North Korea's submarine-launched ballistic missile program is making progress, but it was unlikely to become operational before 2020.