Former UK Prime Minister Tony Blair overstated the threat posed by Saddam Hussein and led Britain to join the US-led invasion of Iraq in 2003 before exhausting peaceful options, a British inquiry has said. 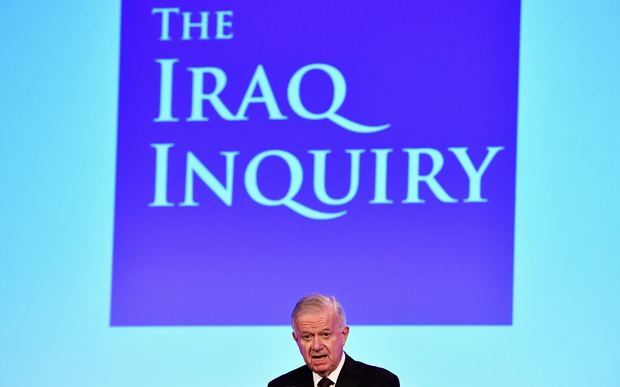 Iraq Inquiry chairman Sir John Chilcot speaks as he comments on the findings of his report. Photo: AFP

Published seven years after the inquiry was set up, the report runs to 2.6 million words - about three times the length of the Bible - and includes details of exchanges Mr Blair had with then US President George W Bush over the invasion.

In a scathing critique of Mr Blair's leadership, the inquiry said the threat posed by Iraqi dictator Saddam Hussein's supposed weapons of mass destruction had been over-hyped and the planning for the aftermath of war had been inadequate.

"It is now clear that policy on Iraq was made on the basis of flawed intelligence and assessments. They were not challenged and they should have been," the head of the inquiry, John Chilcot said in presenting its findings.

In response, during a 109-minute news conference, Mr Blair was at times contrite and emotional, and at others clearly angry at the way his actions had been portrayed. 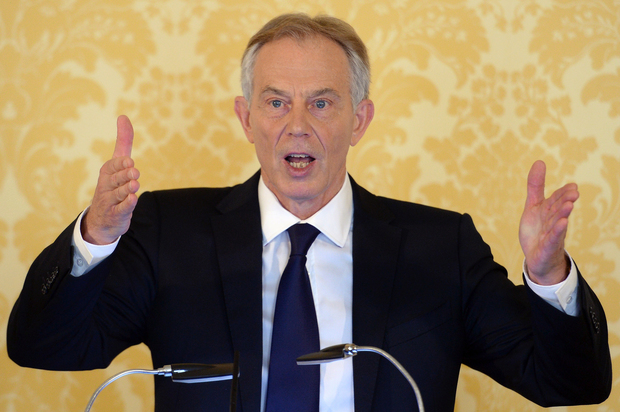 "If you disagree with me fine, but please stop saying I was lying or I had some sort of dishonest or underhand motive," he told reporters, hours after the release of the scathing report.

"'You lied about the intelligence' - that's what people say the whole time," Blair said. "Actually if people are being fair and read the whole report, that allegation should be put to rest, because it's not true and it never was true."

Mr Blair said he accepted total responsibility "without exception or excuse" and acknowledged failing to adequately plan for the aftermath of the invasion.

But he disputed one of the report's key findings; that diplomatic options had not been exhausted at the point he decided to join the US invasion, saying he had faced a "binary" decision which could not have been delayed.

In the lengthy and passionate defence, Mr Blair justified his decision to back Mr Bush and go to war at a time when the inquiry said peace options had not been exhausted and Saddam posed no imminent threat.

"I did not mislead this country. There were no lies, there was no deceit, there was no deception," the former prime minister told reporters. "But there was a decision, and it was a controversial decision ... to remove Saddam and to be with America. I believe I made the right decision and the world is better and safer as a result of it."

Mr Blair said he did not believe the removal of Suddam Hussein was the cause of terrorism seen today in the Middle East or elsewhere.

'I will be with you'

The inquiry report shed light on the interaction between Mr Blair and US President George W. Bush in the months leading up to the invasion, which has long been the subject of speculation about secret deals and pledges.

In a memo dated July 28, 2002, eight months before the invasion, Mr Blair told Bush: "I will be with you, whatever. But this is the moment to assess bluntly the difficulties."

Outside the building where Sir John Chilcot, the inquiry's chairman, delivered his findings, protesters chanted "Tony Blair, war criminal". But the report itself stopped short of saying the war was illegal.

"We have, however, concluded that the circumstances in which it was decided that there was a legal basis for military action were far from satisfactory," Chilcot said.

Reg Keys, whose son, 20-year-old Lance Corporal Thomas Keys, was killed in Iraq, said: "We all know who the key players are ... who took part in this most shambolic episode in British politics. We would like to see all those key players face some form of accountability."

He added: "If that's through the legal channels, then we will look at that and see what's viable and appropriate. It has been passed over to lawyers."

Post-invasion problems should have been foreseen

The Chilcot report said there was no imminent threat from Saddam in March 2003, and the chaos in Iraq and the region which followed should also have been foreseen.

The invasion and subsequent instability in Iraq had, by 2009, resulted in the deaths of at least 150,000 Iraqis, mostly civilians, and displaced more than a million.

The inquiry's purpose was for the British government to learn lessons from the invasion and occupation that followed, in which 179 British soldiers died.

Iraq remains in chaos to this day. Islamic State controls large areas of the country and 250 people died on Saturday in Baghdad's worst car bombing since the US-led coalition toppled dictator Saddam Hussein.

Opponents of Mr Blair's decision to join the war will pore over the report for its judgment on how the Labour leader, who quit in 2007, justified the military action. At the time, he said intelligence showed that Saddam had weapons of mass destruction but after the invasion none were found. 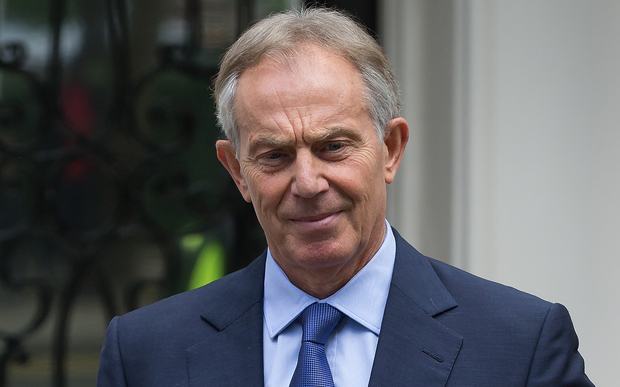 The inquiry looked at the reasons for the invasion, the war itself and the aftermath - and has taken longer to complete than the British military involvement itself.

Public hearings, including two appearances by Mr Blair, ended in 2011 but since then the writing of the report has been dogged by rows over the release of secret government files and the contacts between London and Washington. It includes details of notes from Mr Blair to Mr Bush and quotes from more than 130 records of their conversations.

Outside the building where Sir John Chilcot delivered his findings, protesters chanted "Tony Blair, war criminal". But the report itself stopped short of saying the war was illegal.

"We have, however, concluded that the circumstances in which it was decided that there was a legal basis for military action were far from satisfactory," Sir John said. 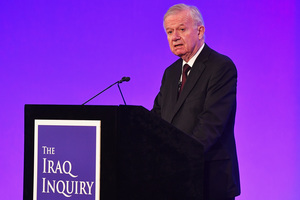 "You cannot have a situation where this country blunders into an illegal war with the appalling consequences and at the end of the day there isn't a reckoning," SNP lawmaker Alex Salmond told Sky News.

The Sunday Times newspaper also reported that Labour leader Jeremy Corbyn - whose own position is in jeopardy after Britain voted last month to leave the European Union - was simply hanging on because he wanted to "crucify Blair".

What was the Iraq War?

The war, which lasted about six weeks, ended Saddam Hussein's 25-year regime in Iraq, but the aftermath unleashed years of sectarian violence that has killed thousands since then.

The key points of the report

Sir John said he believed the report - which is 2.6 million words long - was a "reliable account" of the decisions that led to the UK's involvement in the war.

Asked what the main lessons were, Sir John said there would be recommendations on political decision-making, diplomacy, the gathering and presentation of intelligence and military planning.

"The main expectation that I have is that it will not be possible in future to engage in a military or indeed a diplomatic endeavour on such a scale and of such gravity without really careful challenge analysis and assessment and collective political judgement being applied to it.

"There are many lessons in the report but that probably is the central one for the future."

Build-up to the war

Momentum in Washington towards taking action against Saddam Hussein quickly began to build in the wake of the 9/11 attacks in 2001 in the US, which killed nearly 3000 people.

The US and UK were part of an international coalition which invaded Afghanistan, regarded as a "safe haven" for terrorists, in late 2001 to rid it of the Taliban.

In January 2002, President Bush named Iraq as part of what he described as an "axis of evil" in what he said was a "war on terror" against al-Qaeda and other groups.

The Iraq Inquiry has focused heavily on a series of meetings between President Bush and Tony Blair, including one at his Texan ranch in April 2002, about Iraq and what promises were given by the prime minister about British support in the event of military action. 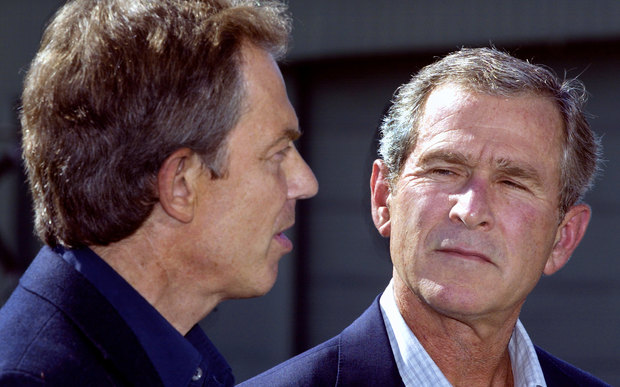 The then Labour Prime Minister Tony Blair's decision to commit British troops to the invasion, following a vote authorising military action in the House of Commons, was one of the most controversial foreign policy decisions of the past 50 years.

Mr Blair was one of more than 100 witnesses to give evidence to the inquiry, appearing before the panel twice, and the report includes details of declassified Cabinet papers, intelligence assessments of Iraq's weapons capability and private correspondence between Mr Blair and the then US President George W Bush relating to the conflict and the basis for the military intervention.

The panel had had to "assemble, assess and analyse" 150,000 government documents - many of which would otherwise have remained secret for 30 years.

The former prime minister has faced accusations that he agreed in principle to support US military intervention in Iraq as early as April 2002 and that he "exaggerated" and "misused" intelligence about Iraq's WMD capability - denied by Downing Street at the time.

Mr Blair has, on numerous occasions, defended his decision to commit British troops, saying he would do so again in the face of what he said had been a serious threat posed by Saddam Hussein.

But he has since "apologised" for what he has said were deficiencies in the intelligence about whether Iraq possessed weapons of mass destruction and its capacity to use them.