A masked man who reportedly fired shots in a cinema complex in western Germany has been shot dead by police, the state's interior minister has said. 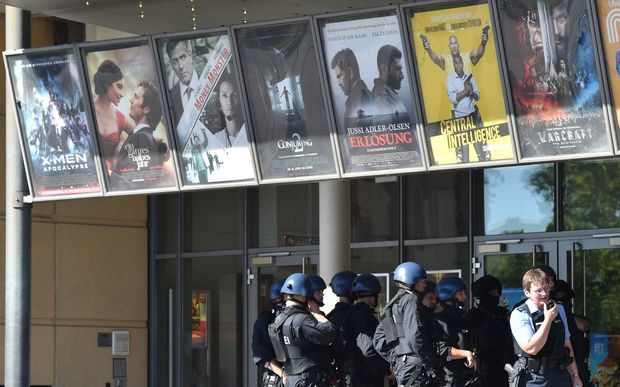 Police forces stand in front of a cinema where an armed man barricaded himself in Viernheim, southern Germany. Photo: AFP

Peter Beuth told the state of Hessen's parliament that police stormed the Kinopolis complex in Viernheim, near Frankfurt, after shots were reported.

"The police thought that the gunman was holding hostages and because of that he was shot dead," he added.

Mr Beuth said no-one else had been hurt.

However, reports said some people were suffering the effects of tear gas released as police stormed the complex.

German media said the security sources had played down suggestions that it may have been a terror attack. They said the man appeared to have been a confused individual who was acting alone.

Heavily armed police surrounded the complex after the incident began on Thursday afternoon.

Mr Beuth also said: "The police had an emergency call at 2.45pm (12.45am NZT). The caller said there was a masked man... armed with a long gun. It is unclear whether it was a real gun.

The Frankfurter Allgemeine newspaper said it was unclear if there was a political or ideological motive, or if it was an attempted robbery.