Democrats of the United States Congress are refusing to leave the floor of the House of Representatives in an effort to force a vote on gun control laws.

The nearly 100 representatives and senators want expanded background checks and the blocking of firearms purchases to suspected terrorists.

It follows the shooting of 49 people at a gay nightclub in Florida this month. 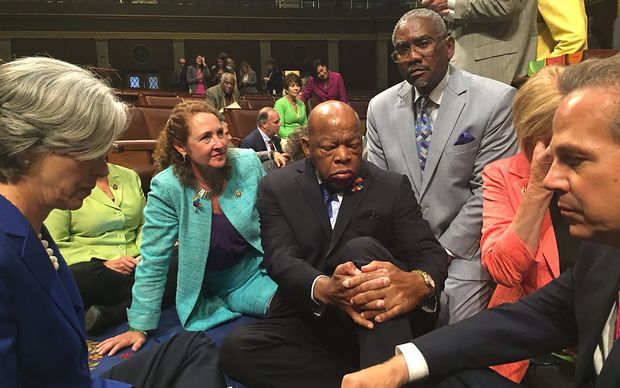 John Lewis, with his eyes closed, stages a sit in with other members of Congress on the floor of the US House of Representatives. Photo: AFP

Republicans, who have majority control of the congress, called a recess which forced the cameras to be switched off, so the protesters took their message online.

Some were tweeting pictures and one congressman was broadcasting via streaming app Periscope.

The effort was being led by John Lewis, a veteran of the civil rights movement of the 1960s, who has already led one walkout of the House since the attack in Orlando.

President Barack Obama took to Twitter to thank Mr Lewis "for leading on gun violence where we need it most".

Mr Lewis asked what the congress had done to respond to the violence, referring to several failed efforts in the past week to pass a gun control bill.

"Nothing. We have turned a deaf ear to the blood of innocents. We are blind to a crisis. Where is our courage? How many more mothers... and fathers need to shed tears of grief?"

Connecticut is the state where 20 children and six adults were shot to death in 2012 at the Sandy Hook primary school.

"We will occupy this chamber," Mr Larson told his colleagues before cameras were switched off.

A spokesperson for Paul Ryan, the Speaker of the House, tweeted: "The House cannot operate without members following the rules of the institution, so the House has recessed subject to the call of the chair."

The lawmakers want a vote to be held before the scheduled break at the end of the week, ending on 5 July.