At least 36 people have been arrested in Lille in a day of recurring clashes between French police and football fans at the Euro 2016 tournament.

French police said the arrests had been made throughout Wednesday and added that 16 people had been hospitalised. 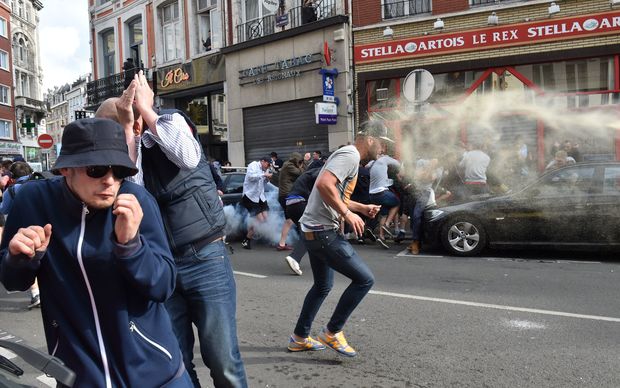 On Wednesday evening (French time), riot police charged at hundreds of English football fans as flares and bangers were lit.

Tear gas had been used by riot police and it appeared to be mostly English fans that were involved.

Earlier, some English and Russian fans were detained after scuffles.

Supporters of England and Wales are in the city ahead of the teams' match in nearby Lens on Thursday.

Russian and Slovakian fans are also in Lille, after their match at the city's Stade Pierre-Mauroy on Wednesday.

Earlier on Wednesday, hundreds of English fans were surrounded by riot police in the city's main square.

The fans were then pushed back into the corner of the square by police in riot gear, before the square was cleared.

English fan Oliver Larkworthy, from Norwich, is in Lille and was caught up when police fired tear gas at fans at the city's railway station.

"I saw a massive crowd running down the street - English fans, Slovakian fans and locals mainly, a real mix," he said.

"There is a massive mob of Russian fans standing outside the station just waiting to cause trouble. The whole thing is a disaster waiting to happen. It's like a massive tinder box waiting to go off any minute."

The Russian football team were given a suspended disqualification from the tournament following attacks by their supporters on English fans at their opening fixture in Marseille on Saturday.

Uefa also threatened to disqualify England from Euro 2016 if there was any further violence by fans.

Six English fans, aged 20 to 41, received jail sentences from one to three months, in relation to disorder surrounding the England-Russia game.

On Wednesday, Russia's foreign ministry summoned the French ambassador to Moscow as well as sharply criticised policing at the Euro 2016 tournament.

"Further stoking of anti-Russian sentiments... could significantly aggravate the atmosphere in Russian-French relations," the ministry said.

Michel Lalande, the prefect of the Nord-Pas-de-Calais Picardy region, said a drinking ban was in place in some parts of central Lille and the stadium.

Shops selling alcohol in the city closed from 6pm on Friday, he said.

However, small supermarkets were still selling alcohol on Wednesday afternoon, and drinking was taking place openly on the streets. 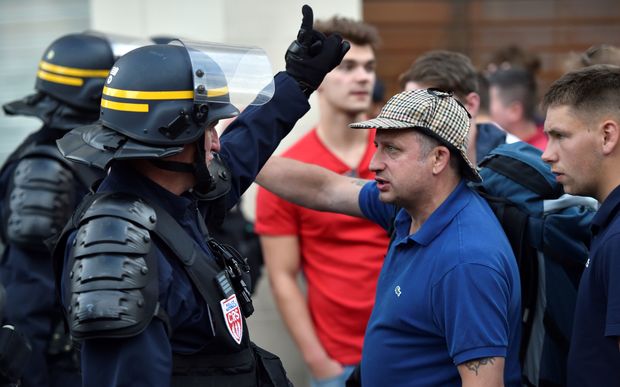 Vince Alm, of the Football Supporters' Federation Cymru, said the ban was not enforceable. "There are so many outlets around it's impossible," he said.

Fans are being discouraged from travelling if they are without a ticket to the England-Wales game, and the authorities had also asked those with a ticket to delay travel until the day of the game.

Those without match tickets can watch the match in the city's fan zone, where lower-strength beer will be sold.

Mr Lalande also said anyone carrying out violence would be removed from the country.

British Transport Police officers have been travelling with fans on Eurostar trains on Wednesday.

Eurostar is running some alcohol-free services, with no alcohol allowed through check-in or purchased at departure lounges or on board.