Oscar Pistorius has removed his prosthetic limbs and hobbled around the courtroom to show his disability at his sentencing hearing in South Africa. 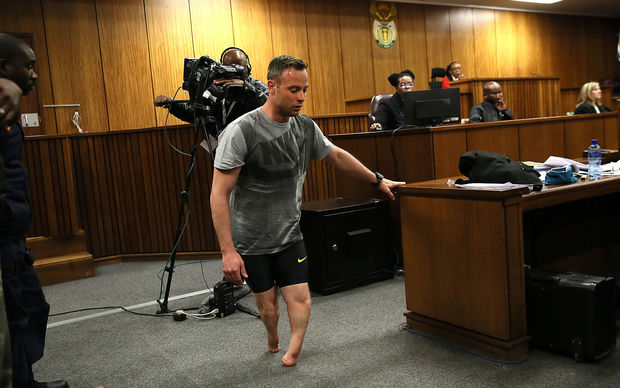 Pistorius walks in the courtroom without his prosthetic legs during his resentencing hearing. Photo: AFP

The former Olympic athlete was on his stumps when he shot his girlfriend Reeva Steenkamp through a door at his home in 2013, and his defence made much of his vulnerability.

The hearing in Pretoria was called after a court convicted him of murder, overturning a manslaughter verdict.

Pistorius will be sentenced on 6 July.

The six-time Paralympic gold medallist, whose legs were amputated below the knee as a baby, made history by becoming the first amputee sprinter to compete at the Olympics in 2012, running on prosthetic "blades".

Judge Thokozile Masipa has granted permission for the crime scene photos to be made public - a request made by Ms Steenkamp's father, who gave emotional testimony on Tuesday (local time), saying Pistorius should pay for killing his daughter. 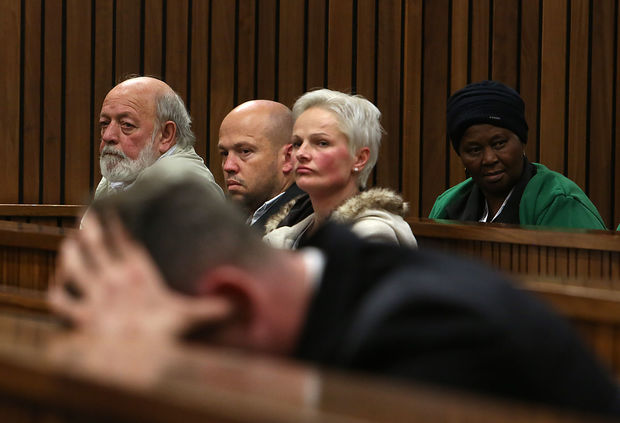 Pistorius,(Foreground) holds his head in his hands as members of Reeva Steenkamp's family including her father Barry Steenkamp look on during his resentencing hearing. Photo: AFP

On Wednesday, the Pretoria High Court heard testimony from Ms Steenkamp's cousin Kim Martin, who said the victim had not loved Pistorius though she had been fond of him.

The athlete's defence team had argued that he mistook Ms Steenkamp for an intruder. 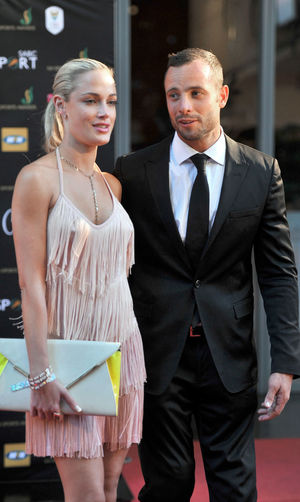 The double amputee faces a jail term of 15 years but it may be reduced due to time already spent in prison and mitigating factors.

Oscar Pistorius has spent all his life fighting misconceptions about disabled people but today, with this fate hanging in the balance, he hobbled in the courtroom before Judge Masipa - desperate to show his vulnerability.

Very few people have seen this world-renowned athlete this way. Over the course of his trial, we learned of a self-conscious Pistorius worlds apart from the demi-god celebrated for his sporting prowess.

It is one of those moments that will remain etched on the minds of many - it is beyond doubt that defence lawyer Barry Roux made an impression here. But theatrics aside, Gerrie Nel, for the prosecution, reminded the world of the hard facts: Reeva Steenkamp was dead and Oscar Pistorius killed her.

Mr Nel argued that South Africa's high murder rate and seeming leniency of the courts could no longer go unchallenged. He implored the judge to not let this be "business as usual".

Now Judge Masipa, a decorated and well-respected judge, who though softlhy-spoken speaks with authority, is now faced with the difficult task of imposing a sentence. 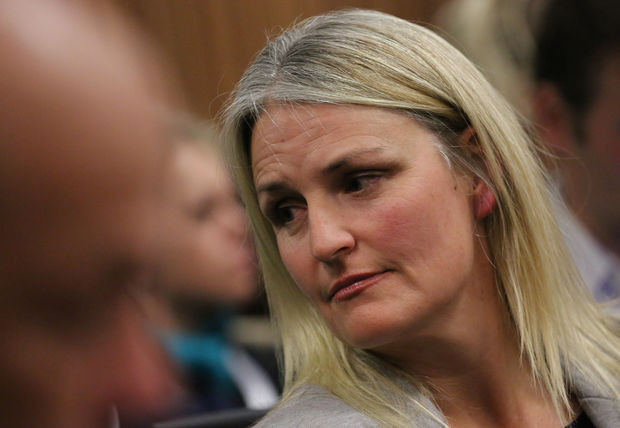 Making his final plea for the defence, lawyer Barry Roux stressed his client's disability as he gave his version of events at the former athlete's home on Valentine's Day 2013.

"It is three o'clock in the morning, it is dark, he is on his stumps," he said.

"His balance is seriously compromised and... he would not be able to defend himself. He was anxious, he was frightened...

"He believed the person in the toilet was an intruder and deceased was at the time in the bed," Mr Roux said.

The lawyer asked Pistorius to remove his prosthetic limbs and the sobbing former star, who was wearing shorts, took them off and hobbled about.

He argued that a sentence with community service should be considered.

In his closing argument for the prosecution, state lawyer Gerrie Nel pushed for a severe penalty.

"He knew there was someone behind the door," he said.

"Using a lethal weapon, a loaded firearm, the accused fired not one but four shots to the toilet door. He failed to provide any acceptable version for his conduct."

Ms Martin, who was called as the final witness for the prosecution, said she did not believe the true version of events had come out.

Mr Roux asked her about the couple's relationship.

Ms Steenkamp, a model and law graduate, was excited and fond of Pistorius, "but I couldn't see love", Ms Martin replied.

Pistorius was initially jailed for manslaughter in 2014 and was released into house arrest after a year, but his conviction was changed to murder in December 2015 after the prosecution appealed.

He had been released from prison last October and allowed to serve out the remainder of his initial sentence under house arrest at his uncle's property in Pretoria, the capital of South Africa.