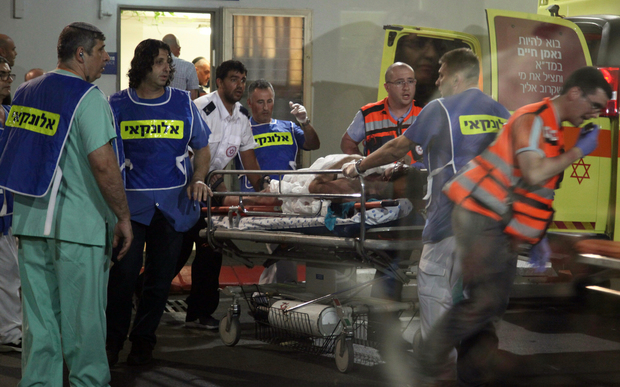 Israeli medics arrive with an injured person at a hospital a few moments after the shooting attack. Photo: AFP

Police said the gunmen were from Yatta, a Palestinian village near the West Bank town of Hebron.

Both are in custody. One is undergoing surgery in hospital, police added.

There has been a rise in Palestinian attacks on Israelis since last year, with a series of shootings, stabbings and car rammings, although the number of incidents had dropped in recent months.

The attacks happened at around 21:30 (local time) as people were relaxing in the market's restaurants and bars.

Security footage showed the pair, dressed in suit and tie and posing as customers at a restaurant, suddenly pull out automatic weapons and open fire, shooting one man point blank, as other diners fled.

Footage showed crowds running from the scene and ambulances arriving. Pictures showed upturned tables and chairs at one restaurant.

One woman told Israel's Channel 10 TV that she had been celebrating her son's birthday when she heard shots and "immediately understood it was a terror attack".

"We ran like lightning with the baby and the stroller," Meital Sassi said. "I yelled at people who didn't understand what was happening to run."

Ichilov hospital, where the injured were taken, said four wounded people brought to the hospital had died and at least three of the other wounded were in a critical condition. 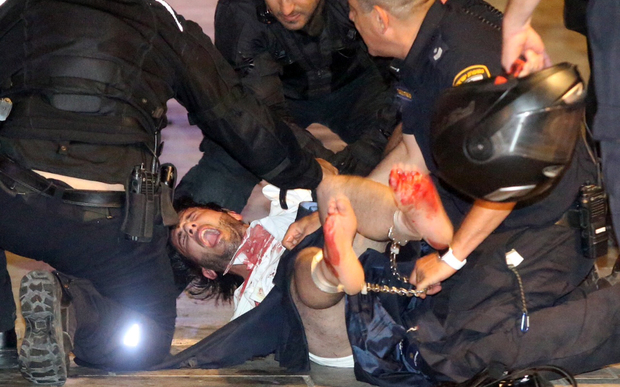 Police apprehend a suspect at the scene of the shooting in Tel Aviv. Photo: AFP

"Two terrorists arrived at the complex and while firing, and to our regret, nine people were injured to different degrees," he said.

"Of the two terrorists, one was arrested and the other wounded by gunfire. The weapons they were carrying have been seized."

The director of the market, Shlomi Hajaj, told Channel 10 that security guards at the entrance had "prevented the attackers from entering the facility, averting a bigger disaster as the compound was packed with people." 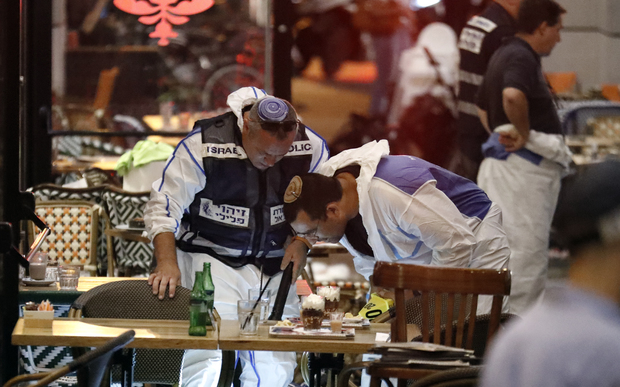 The attack was one of the most serious in the country's business and entertainment capital since a wave of Palestinian violence erupted eight months ago.

A lull over the past several months in what had been near-daily stabbings and shootings made the attack just metres from the sprawling defence compound surprising and was likely to bring back a sense of insecurity to Israeli streets.

Prime Minister Benjamin Netanyahu, returning from a visit to Moscow, rushed directly to the Defence Ministry to assess the situation with senior ministers and security chiefs. 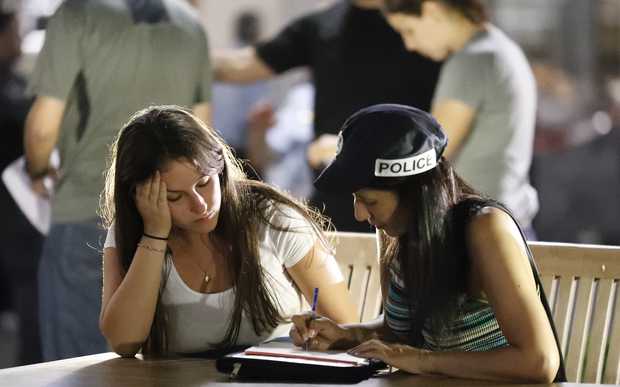 An Israeli policewoman (right) interviews a witness at the site of a shooting attack in Tel Aviv. Photo: AFP