The father of a Stanford University student convicted of sexual assault has sparked outrage on social media by saying his son should not have been jailed for "20 minutes of action". 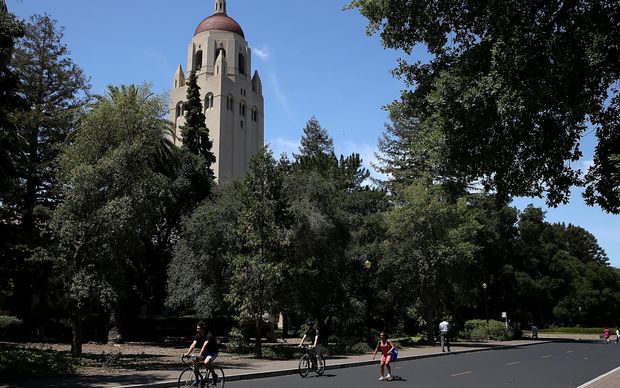 The female victim was seen lying unconscious on the ground on the Stanford campus. Photo: AFP

The victim's impact statement, which was read out in court, was also widely shared on social media.

The judge expressed concern about the impact of prison on Turner.

Prosecutors said that in January 2015, Turner had been seen by two witnesses sexually assaulting the woman, who was lying on the ground, unconscious, on the Stanford campus.

They said Turner had tried to run away when challenged by the witnesses, but the pair had tackled him and held him until police officers arrived.

A former top swimmer at the university, Turner was found guilty in March of three felony charges. Prosecutors wanted a sentence of six years in state prison for him, the Mercury News reported.

His sentencing, to six months and probation, also required him to register as a sex offender for the rest of his life.

In an excerpt of a statement to the court before the sentencing, Brock's father, Dan, said his son's life had been "deeply altered forever".

"His life will never be the one that he dreamed about and worked so hard to achieve," he said.

"That is a steep price to pay for 20 minutes of action out of his 20 plus years of life."

Many Twitter users reacted angrily, both to the sentence and the tone of the father's letter.

Some 28,000 people have also signed a petition to recall the sentencing judge, Aaron Persky, for passing what they called a "lenient sentence".

Mr Persky said a harsher prison penalty would have had "a severe impact" on Turner.

In his decision, he said positive character references and Turner's remorse and lack of previous criminal record were mitigating factors.

In an impact statement read out in court, the victim, now 23, addressed her attacker, saying his actions had left her emotionally scarred.

She criticised Turner for not admitting the crime and putting her and her family through an "invasive" and "aggressive" trial.

Later, the victim told BuzzFeed she was disappointed with the "gentle" sentence.

But "even if the sentence is light, hopefully this will wake people up," she said.

"I want the judge to know that he ignited a tiny fire. If anything, this is a reason for all of us to speak even louder."

District Attorney Jeff Rosen said "the punishment does not fit the crime".

"The predatory offender has failed to take responsibility, failed to show remorse and failed to tell the truth.

"The sentence does not factor in the true seriousness of this sexual assault, or the victim's ongoing trauma. Campus rape is no different than off-campus rape. Rape is rape."