Three people are dead and three others missing after a massive storm flooded rivers, uprooted trees and tore into beaches along Australia's east coast. 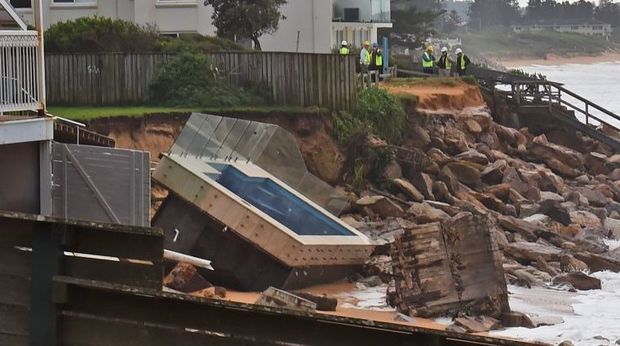 An in-ground pool sits amongst the rocks after a severe storm at Collaroy on Sydney's northern beaches. Photo: AFP

Erosion at Sydney's Collaroy Beach has forced the evacuation of multi-million dollar homes, which are now in danger of collapsing.

The storm cut power to 86,000 homes in NSW at the weekend, and thousands are still without power.

On Monday morning, a man's body was found in the Cotter River near Canberra. Police said the 37-year-old was caught in floodwaters at a river crossing.

Police divers have also retrieved the bodies of two men whose cars were washed off roads in separate incidents.

A 65-year-old man was caught inside his vehicle at Bowral, while another man was killed after his utility vehicle was washed off the road on Sydney's south-west fringe.

Flood warnings have been issued across several states, with northern Tasmania facing its worst flooding in decades on Monday.

Police have suspended searches for another man missing from rocks near Sydney's Bondi Beach, and for two elderly people feared drowned in Tasmania.

Both searches are expected to resume on Tuesday.

In NSW, as towns from Lismore in the north to Wollongong and south-west Sydney dealt with flooding, a number of houses and a unit block were evacuated on Sydney's northern beaches when the wild weather battered the coast.

People were removed from about seven houses and the unit block in Collaroy as large waves up to 8m high continued to erode the coast, crossing 50m over the coastal road, police said.

A number of properties had been damaged with backyards washed away, they said.

"One of the properties along that strip actually lost an entire in-ground pool which had moved above 5m out to sea," Inspector Jason Reimer said. 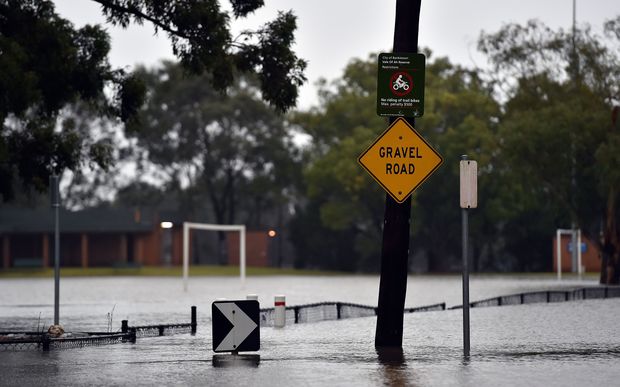 Floodwaters submerge a road after the Georges River burst its banks in Sydney. Photo: AFP

Narrabeen resident Adam Deere-Jones and his family stayed with relatives after the Narrabeen Lagoon burst its banks and threatened to flood his home.

"It was pretty scary. It all happened pretty quickly," he said.

On Sunday night, a number of sinkholes opened up along the foreshore and emergency services worked into the night to save the homes.

One local resident, David, said the erosion was immense.

Sydney's Eastern Suburbs were also badly hit, with Coogee's historic surf club suffering extensive damage. The club, which has stood since 1907, is now at risk of collapse.

Across NSW, 21 flood warnings were in place and thousands were without power on Monday.

In Lismore, the river peaked at 9.1m, damaging roads, parks and infrastructure, although newly installed levees on the Wilson River prevented more widespread damage to property.

In Sydney's west and south-west, residents were evacuated from low-lying areas near the Georges River, Chipping Norton, Milperra, and Picton due to flooding, and several roads in the area were closed.

In Picton, about 30 businesses were flooded after 2m of water swept through the town last night, coating properties in mud.

Communities near the Nepean River in Sydney's west and south-west were also watching river levels, with several properties affected in Camden.

Phil Perkins, from Australia's Bureau of Meteorology (BoM), said there were still areas of concern in Sydney and in the state's far south. 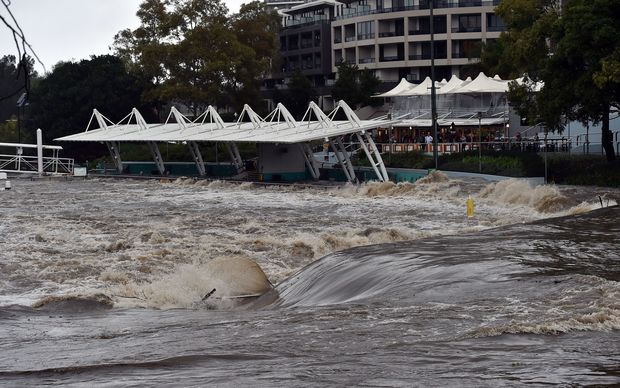 A ferry terminal was submerged by the overflowing Parramatta river in Sydney yesterday. Photo: AFP

"We've got major flooding or a major flood warning for the Nepean and a minor but pushing major for the Hawkesbury as well as the Georges River," Mr Perkins said.

"We've got moderate in the Bombala River in the Snowys, Moruya as well as the Shoalhaven, Queanbeyan and Molonglo."

On the Central Coast, Terrigal was badly hit by the tidal surge when the rising lagoon forced the evacuation of a motel.

A large number of main roads, including across the Sydney metropolitan area, were not in use.

By Monday afternoon, there had been about 10,000 calls for assistance statewide, NSW's State Emergency Service said. 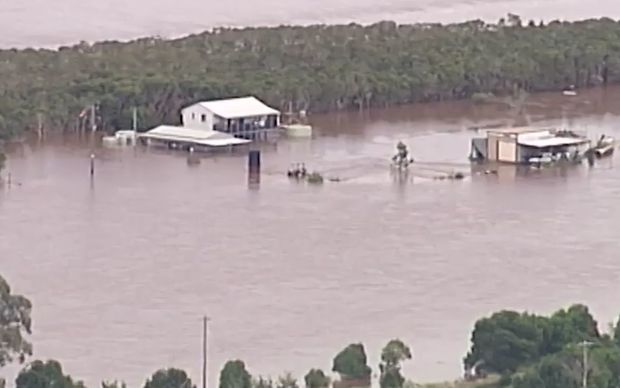 The heaviest rainfall in Sydney's metropolitan area was Ingleburn in the south-west, with 379mm falling.

On the South Coast, Jervis Bay received 400mm while Robertson in the Southern Highlands received 618mm.

"I grew up in a town called Parkes in the Central West and that's our annual rainfall in a weekend," said another BoM forecaster, Rob Taggart. "It's quite unbelievable."

In Coffs Harbour, huge waves that caused damage to the marina on Saturday continued into Sunday.

As the storm moved south, major flood warnings were issued for seven rivers in Tasmania.

A man was reportedly swept into the Ouse River from his own backyard on Monday, while a woman was missing after floodwaters inundated her house in the state's north-west.

Parts of Launceston, Latrobe and Railton were all underwater on Monday.

The MetService website said a complex trough was expected to approach New Zealand on Wednesday, with a moderate likelihood of heavy rain around Westland, Fiordland, the Otago and Canterbury headwaters and Buller over the following three days.