At least 24 people have been killed and 40 others injured during clashes between the police and squatters in the northern Indian town of Mathura. 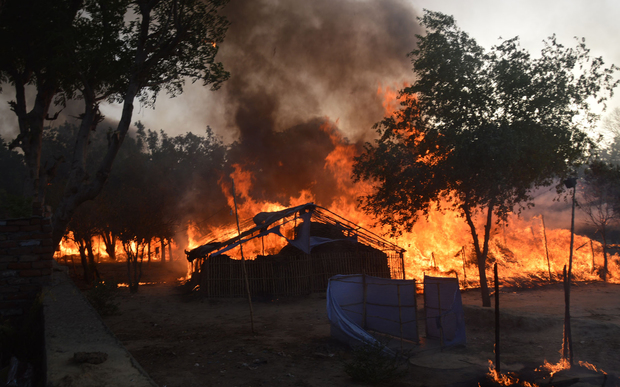 Former homes of Indian members of a sect burn following clashes with police during an eviction at the Jawahar Bagh park in Mathura on Thursday. Photo: AFP

Clashes broke out on Thursday when police tried to evict the former members of a religious sect who had been occupying a park for two years.

Two senior police officers are among those killed.

Akhilesh Yadav, the chief minister of Uttar Pradesh state, has ordered an inquiry into the violence.

"At 5pm on Thursday, a police team visited the Jawahar Bagh park for a recce following a court order to evict the squatters," state police chief Javed Ahmed told a news conference.

"The protesters fired at the policemen without any warning or provocation. They also pelted the team with stones. Two senior police officers were killed in the attack."

He said more police teams were sent to the scene to bring the situation under control, and his colleagues retaliated after some of the protesters attacked them.

Mr Ahmed added that some of the protesters had died from bullet and other injuries sustained during the clash, but at least 11 were killed in a blaze caused by cooking gas cylinders.

More than 300 people have been arrested and the situation has been brought under control. Police have recovered a large number of firearms from the park, he said.

Reports say the group is headed by Ramvriksha Singh Yadav, but very little is known about him.

Members of the group earlier followed religious guru Baba Jai Gurudev, but since his death in 2012 some had started calling themselves "revolutionaries" and claimed to be followers of Indian independence hero Subhas Chandra Bose.

The group has been making radical demands such as declaring the Indian parliament and the posts of prime minister and president unconstitutional.

They also want the authorities to sell fuel at dirt-cheap prices. In their view 40 litres of petrol or 60 litres of diesel should cost just 1 rupee (about 2 NZ cents).