Men with larger waistlines could be at higher risk of developing aggressive prostate cancer, a study suggests.

University of Oxford research on 140,000 men from eight European countries found men were most at risk when their waist was bigger than 94cm.

Prostate cancer is the most common cancer in men. 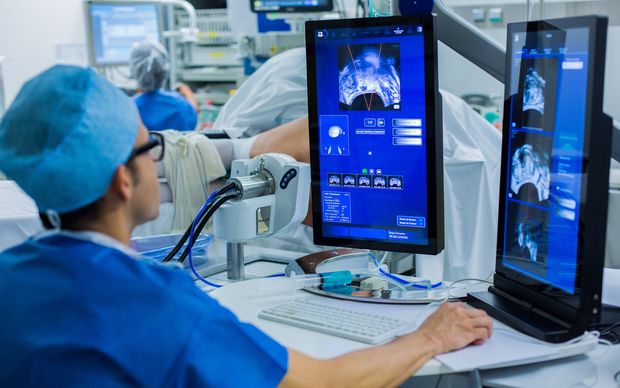 The study, presented at the European Obesity Summit in Gothenburg, Sweden, looked at the association between body measurements in men in their 50s and prostate cancer risk over 14 years.

In that time, there were about 7000 cases of prostate cancer, of which 934 were fatal.

The researchers found that men with a higher body mass index (BMI) and waist circumference had an increased risk of high grade prostate cancer, an aggressive form of the disease.

Dr Aurora Perez-Cornago from the Nuffield Department of Population Health at the University of Oxford said the study showed that the association between body size and prostate cancer was complex and varied by disease aggressiveness.

She said it was likely to be down to cancer-causing hormones in fat cells, but this had not yet been proven.

Her advice was that "men should try to maintain a healthy weight and if possible lose weight around their waist".

But she added the study had not specifically looked at the impact of losing weight on prostate cancer risk.

A spokesman for Prostate Cancer UK said the research added to evidence that showed weight and waist size could be another crucial risk factor for men to be aware of when it came to protecting themselves against prostate cancer.

Thea Cunningham, health information officer at Cancer Research UK, said more research was need to get a clearer picture of the link.

She added: "Keeping a healthy weight can help men reduce their risk of several other cancers including bowel cancer."