Employers in the EU may be able to ban Muslim staff from wearing headscarves to work as long as it is part of a general prohibition on all religious symbols, a top EU court adviser says.

It came after a Belgian court sought clarification on what is banned by EU anti-discrimination laws.

In the Belgian case, a receptionist was fired for wearing a headscarf to work. 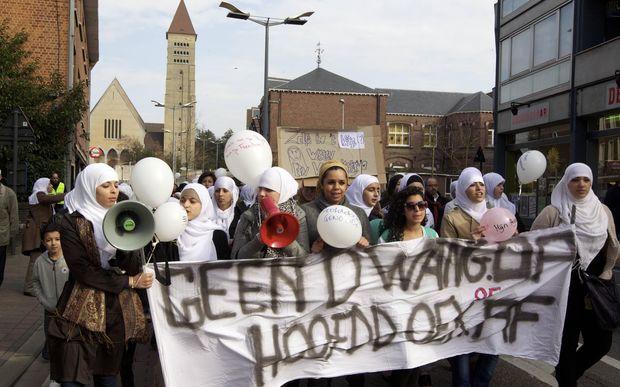 A protest in Belgium after another woman left her job following a dispute over her hijab. Photo: AFP

Samira Achbita claimed she was being discriminated against on the grounds of her religion.

The opinion by Juliane Kokott is not a binding ruling and judges at the ECJ - the EU's highest court - are now considering what final guidance to issue.

BBC Europe Correspondent Damian Grammaticas says they will confine themselves to the legal principles and will leave any decision on the specific case to the Belgian courts.

"A ban on wearing headscarves in companies may be admissible if the ban is based on a general company rule which prohibits political, philosophical and religious symbols from being worn visibly in the workplace. Such a ban may be justified if it enables the employer to pursue the legitimate policy of ensuring religious and ideological neutrality," the opinion from the advocate general said.

She added: "While an employee cannot 'leave' his sex, skin colour, ethnicity, sexual orientation, age or disability 'at the door' upon entering his employer's premises, he may be expected to moderate the exercise of his religion in the workplace."

Ms Achbita had worked for the security firm G4S in Belgium for three years when she insisted on being allowed to wear a headscarf.

She was dismissed because the company bans the wearing of any visible religious, political and philosophical symbols.

Ms Achbita took the company to court backed by a Belgian racial equality group but the case was dismissed by two lower courts. Belgium's court of cassation then referred the case to the EU's top court for clarification.

The wearing of headscarves, and more controversially the Islamic veil, has caused controversy across Europe.

In France, where the separation of state and religion is enshrined in law, a ban on Muslim headscarves and other "conspicuous" religious symbols at state schools was introduced in 2004.

However, last year Germany's highest court struck down a ban on headscarves for state school teachers.