Norbert Hofer of the Freedom Party and Alexander Van der Bellen are each on 50 percent, according to the estimate, which includes postal votes not yet counted.

Official figures from Sunday's ballot give Mr Hofer a lead of 3.8 percent but do not include postal voting.

The final official results will not be known until Monday. 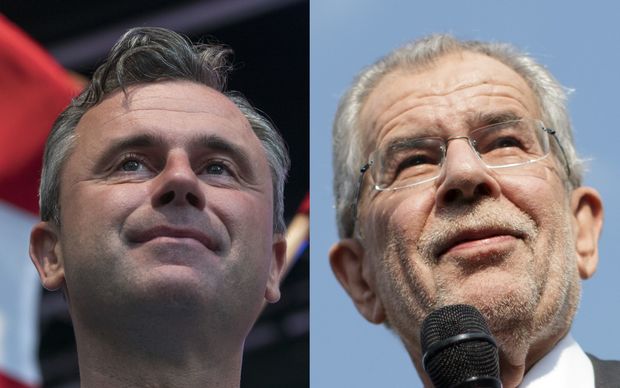 For the first time since World War II, both the main centrist parties were knocked out in the first round.

A key issue in the campaign was Europe's migrant crisis, which has seen asylum-seeker numbers soar.

About 90,000 people claimed asylum in Austria last year, equivalent to about 1 percent of the Austrian population, and the Freedom Party ran an anti-immigration campaign.

The presidency is a largely ceremonial post, but a victory for Mr Hofer could be the springboard for Freedom Party success in the next parliamentary elections, scheduled for 2018.

The presidents of the European Commission and the European Parliament, Jean-Claude Juncker and Martin Schulz, have both expressed concern over a Hofer victory.

According to the interior ministry's final count of votes cast at polling-stations (in German), Mr Hofer took 51.9 percent to 48.1 percent for Mr Van der Bellen.

But ORF public TV's projection (in German), which is usually considered reliable, has both men on 50 percent.

Postal voting accounts for some 900,000 ballots, or 14 percent of eligible voters.

"None of us wished for this," Mr Hofer said when he and Mr Van der Bellen were interviewed by ORF after the vote on Sunday.

"After all, both of us wanted to have a good night's sleep but it is so exciting. I've been in politics for a long time but I've never experienced an election night like this one."

Whoever won, he said, would have "the job of uniting Austria".

Mr Van der Bellen said that if he were elected president he would be welcome in all member states of the EU.

"I have been pro-European during the five months of campaigning," he said. "I made clear how important the European Union is for freedom, security and prosperity - also in Austria."

In the first round, Mr Hofer secured 35% of the votes, while Mr Van der Bellen polled 21 percent.

The two rivals had engaged in an angry TV debate earlier in the week, described as "political mud-wrestling" by commentators.

Campaign soundbite: "To those in Austria who go to war for the Islamic State or rape women - I say to those people: 'This is not your home'"

Campaign soundbite: "I've experienced how Austria rose from the ruins of World War Two, caused by the madness of nationalism."

Such was the political shock at the far right's first-round win that the Chancellor (prime minister), Werner Faymann, resigned after losing the support of his Social Democratic party colleagues.

The Social Democrats and the People's Party have governed Austria for decades, either alone or in coalition.

At the last general election in 2013, they together won just enough votes to govern in a "grand coalition".

Incumbent President Heinz Fischer, 77, could not run again after two terms in office.