Violent protests have broken out in Chile during the state-of-the-nation address by President Michelle Bachelet. 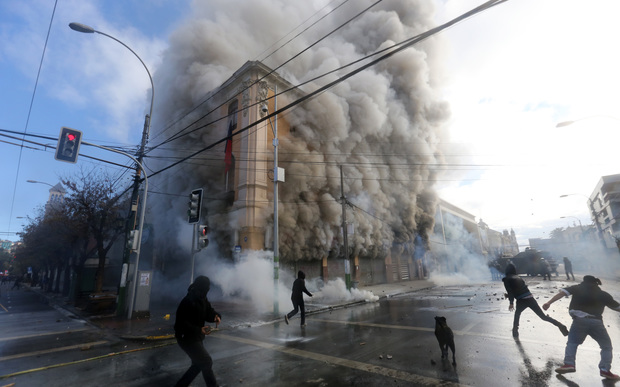 A security guard died from fume inhalation when masked protestors burned a pharmacy and supermarket.

Chileans are angry because of an economic downturn and a corruption scandal involving Ms Bachelet's family.

Some of the fires continued burning for hours and smoke could be seen rising from several places in the city.

Ms Bachelet, who was elected in 2013 promising to reduce inequality, said the country was on a path of reform "from which there is no turning back".

She said policies guaranteeing everyone a free education showed the country was heading in the right direction.

"If we don't make the changes now with everyone working together, the tensions and obstacles will grow and our opportunity to progress will be frustrated," she said.

However, she also said other reforms would be delayed because of the economic slowdown in the country.

Correspondents say there are often protests on the day of the presidential address.