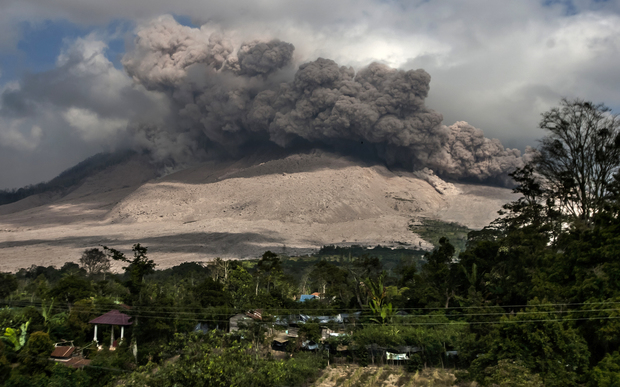 A Mount Sinabung eruption in February this year. Photo: AFP

Mount Sinabung in the Sumatra province violently erupted yesterday, unleashing clouds of molten ash and volcanic gas, as high as 3km into the sky according to Indonesia's national disaster management agency.

The latest body count was at seven dead. Those killed had been farming on the side of the mountain.

All of the victims were farming in an area that was declared by the authorities to be unsafe because of its close proximity to the volcano on Sumatra.

Rescue teams were scouring the area, looking for survivors.

An agency spokesperson said nine people had been affected by the hot clouds.

The victims were farming within the red zone, an area declared off limits by the authorities for safety.

The mountain had been dormant for four centuries before coming to life in 2010, and an eruption just two years ago killed 16 people.

It's one of 120 active volcanoes in Indonesia, which is located on the Pacific ring of fire.

A volcano in central Costa Rica is belching smoke and ash 3000 metres into the air.

Hundreds of people have gone to hospital, complaining of breathing difficulties and skin problems.

Some schools have been shut and some flights into the country cancelled or diverted.

People in the capital San Jose, about 45 kilometres west of the Turrialba volcano, said layers of ash were coating buildings and cars and there was a fierce smell of sulphur.

Officials advised people to wear masks and tight clothing to protect their lungs and skin.