A Melbourne tram derailed and crashed into a home with two people inside after colliding with a car overnight. 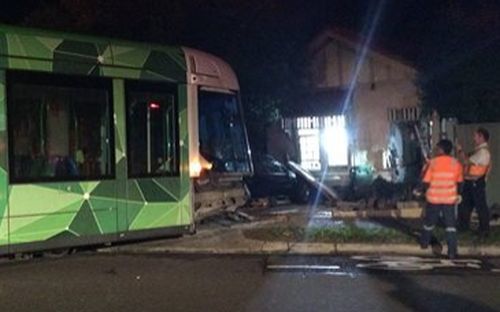 A Melbourne tram smashed into a home after colliding with a car. Photo: Metropolitan Fire Brigade

A woman was left trapped in her car after it collided with the tram head-on in the suburb of Kew at about 11:15pm.

The crash derailed the tram and sent it crashing into a house with two people inside, said Commander Bob Lanigan from the Metropolitan Fire Brigade.

Commander Lanigan said the homeowner had been in bed and was lucky to escape injury.

"He was awoken by some loud bangs and heard something coming through his front yard," he said.

"It actually impacted his bedroom but he's okay, just a bit shaken as you'd imagine."

He said the female driver of the car was taken to hospital with minor injuries.

"[There were] surprisingly few injuries. The lady in the car has been taken to hospital for observation but she seems to be okay, no doubt [she is] in some shock and knocked about a bit," he said.

"There were passengers on the tram as well as the driver and all of those people were uninjured and were able to leave the scene."

Engineers shored up the damaged house so the tram could be moved.

Local police are investigating the cause of the crash.