A whistleblower in a corruption scandal involving Berlin's troubled new airport was sick for months after his coffee was poisoned, German media have reported. 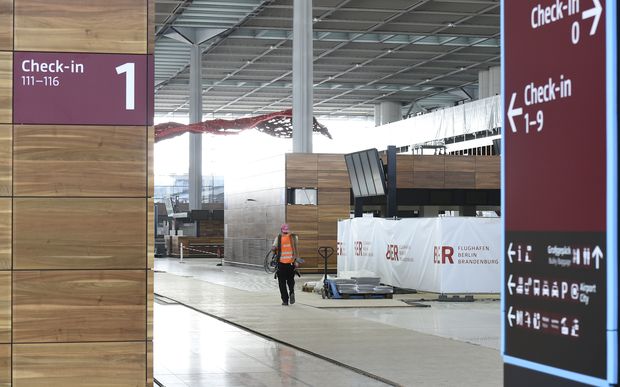 A construction worker in the uncompleted Berlin Brandenburg airport, which was originally expected to open five years ago. Photo: AFP

German prosecutors are investigating allegations of grievous bodily harm after the reports.

Berlin Brandenburg airport was due to open in 2011 but has been dogged by problems.

Prosecutors refused to give details about the case, saying only that "we're investigating because of a suspicion of grievous bodily harm", dpa news agency reported.

Bild am Sonntag newspaper said that the engineer's coffee had been mixed with a "deadly substance" in 2015, as investigators were looking into allegations of bribes handed to airport officials.

When he collapsed at work, his illness was initially blamed on circulation problems but a medical report stated several days later that it was caused by poison, German media said.

The man, aged around 50, was off sick for three months.

No suspects have been identified, officials told Bild.

Four people were charged last year as part of the investigation into construction firm Imtech Deutschland.

Imtech, given the task of overhauling the airport's fire and smoke detection system, filed for bankruptcy in August.

The airport, also known as Willy Brandt airport, is due to replace the ageing hubs at Tempelhof, Tegel and Schoenefeld but has run over-budget by billions of euros.

Construction at the airport, south of Schoenefeld, began in 2006 but repeated delays have pushed the opening date well beyond the original 2011 deadline.

Airport officials had hoped to open the airport in 2017, however latest indications suggest 2019 is a more likely date.

A former chief planner on the site, Dieter Faulenbach da Costa, told Berliner Morgenpost last week he doubted the airport would ever open.

Berlin Brandenburg airport is co-owned by the city of Berlin and the state of Brandenburg, as well as the German government.