Kenyan President Uhuru Kenyatta has set fire to a huge stockpile of ivory in an effort to show his country's commitment to saving Africa's elephants. 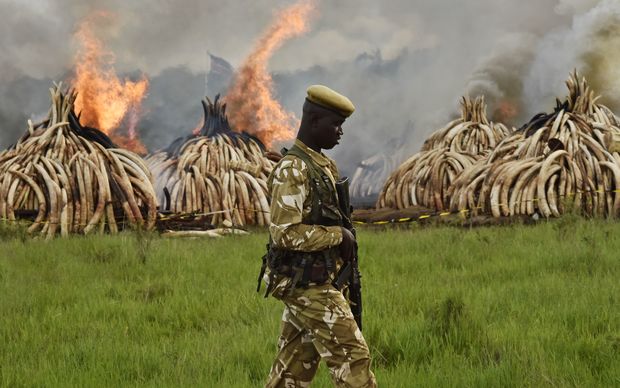 More than 100 tonnes of ivory was stacked up in pyres in Nairobi National Park, where it is expected to burn for several days.

The ivory represents nearly the entire stock confiscated by Kenya, amounting to the tusks of about 6700 elephants.

Some disagree with Kenya's approach, saying it can encourage poaching.

Before igniting the first pyre, Mr Kenyatta said: "The height of the pile of ivory before us marks the strength of our resolve.

"No-one, and I repeat no-one, has any business in trading in ivory, for this trade means death of our elephants and death of our natural heritage."

The burning comes after African leaders meeting in Kenya urged an end to illegal trade in ivory.

Experts have warned Africa's elephants could be extinct within decades.

But some conservationists have expressed opposition to the ivory burn in Kenya, the biggest in history.

They say destroying so much of a rare commodity could increase its value and encourage more poaching rather than less.

Botswana, which is home to about half of Africa's elephants, is opposed to the burn and its president did not attend the event in Nairobi.

Demand for ivory comes largely from Asia, with the main trafficking route being through the Kenyan port of Mombasa.

Africa is home to between 450,000 and 500,000 elephants but more than 30,000 are killed every year for their tusks. Tanzania has lost 65 percent of its elephant population in the past five years.

The Kenyan ivory pyres are seven times the size of any stockpile destruction so far, and represent about 5 percent of global ivory stores.

Some 1.35 tonnes of rhino horn will also be burned.

The street value of the ivory to be destroyed is estimated at more than $US100m, and the rhino horn at $US80m.

"We don't believe there is any intrinsic value in ivory, and therefore we're going to burn all our stockpiles and demonstrate to the world that ivory is only valuable on elephants," said Kitili Mbathi, director general of the Kenya Wildlife Service.