A 20-year-old English person who came out as non-binary to the United States President Barack Obama in London has described the euphoria at being given the chance to speak out. 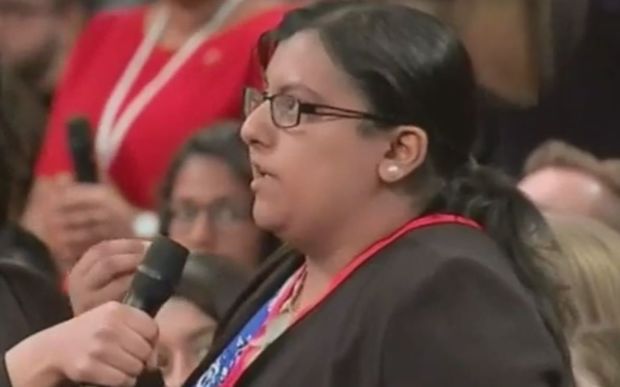 Maria Munir, who is from Watford and studies at York University, was given the microphone at a question and answer session for young people in central London on Saturday.

Speaking to Mr Obama in front of a packed hall, Maria said: "I'm about to do something terrifying, which is I'm coming out to you as a non-binary person.

"It means that I don't fit because I'm from a Pakistani-Muslim background which inevitably has complications."

Maria prefers to be referred to by gender neutral terms such as 'they' and 'their'. It was the first time they had publicly identified as non-binary, which means not identifying as male or female.

2. I did this because I felt I had the opportunity to bring a cause to the forefront of conversation, and it worked. Still a long way to go

Maria had not told their mum or dad and became quite tearful when explaining why they wanted the US president to do more for LGBTQ (Lesbian, Gay, Bisexual, Trans and Queer) people in North Carolina.

Mr Obama told Maria they were on the right track and should feel encouraged that social attitudes had changed faster on this than on any other issue - although it might not feel fast enough to them.

Mr Obama said the US was taking serious steps to address such issues within the federal government, but he could not overturn state laws.

The UK government has warned gay and transgender travellers to be careful if visiting North Carolina because of legislation that requires transgender people to use public toilets according to the sex on their birth certificates.

Earlier this month Canadian rock star Bryan Adams cancelled a concert in Mississippi, in protest at a new law that allows businesses to refuse services to gay people.

Speaking after the session with Mr Obama, Maria explained: "It was something the president said about acting crazy - that if you need to get a social issue across sometimes you need to act a little crazy.

"At that moment I felt my pulse intensify and thought that I've been sitting on this issue for such a long time. I haven't come out to my parents, (I'm sorry mum and dad) I just thought, if anyone in the world is going to accept me for who I am it should be the President of the United States. "

"I just felt this moment of euphoria that finally I would be able to raise and highlight the issue that non-binary transgender people face.

"If anyone has the power to change things for people like myself across the world, it is President Obama."

Maria later told the BBC that they believed their parents were still "reeling" from the fact that they had shaken hands with Mr Obama, and had not yet taken in their revelation.

Maria said their family history made the situation even more poignant.

"I started to feel the tears well up. My parents are immigrants. My granddad did manual labour in Pakistan. My dad worked as a manual labourer in Saudi Arabia before coming here to start a business with literally nothing.

"For me, aged 20, to be sat in front of the President of the United States, leader of the free world, to be able to pitch to him social action..."

4. Wasn't staged, didn't know I was going to be picked or that I'd be at the front. I got lucky and I took the chance because I owed it that

Maria hopes their parents will accept their decision.

"They will be upset I didn't tell them and I really, really am sorry about that, but the emotions that go through your mind when you know that your entire existence isn't even recognised by the UK government is a turmoil I wouldn't wish on anyone.

"I just want to do my degree - I don't want to have my community say I am not a good enough Muslim or that I am betraying them.

"I apologise to my parents because they mean the world to me, but I know that they will accept me when they see how much of a change I can have throughout the world."