The British television comedian and writer Victoria Wood has died of cancer at the age of 62. 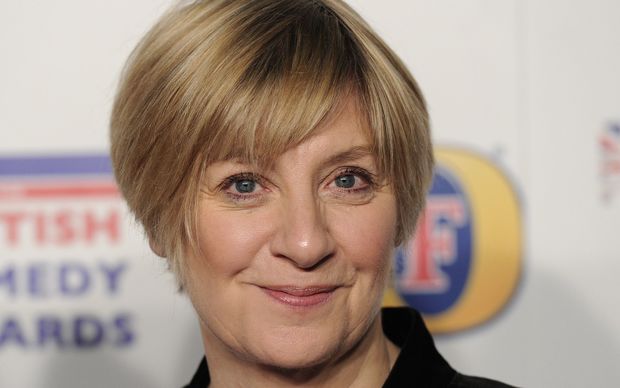 Her publicist said the star "died peacefully at her north London home with family" on Wednesday.

Wood's long-time comedy partner Julie Walters said she was "too heart sore to comment - the loss of her is incalculable".

Wood found fame in the 1980s and was best known for her BBC sketch Acorn Antiques and comedy Dinnerladies.

She won five Baftas including two for her one-off ITV drama Housewife, 49.

Wood got her first break on the TV talent show New Faces in 1974, while still a student at Birmingham University.

She established herself as a comedy star with her hit show Victoria Wood: As Seen On TV and went on to create the popular BBC comedies Acorn Antiques and Dinnerladies, featuring her long-time collaborator Julie Walters.

The pair became friends in the 1970s and first worked together on TV in 1981 on the comedy sketch show Wood and Walters.

Acorn Antiques also spawned a musical, which Wood wrote and was directed by Trevor Nunn in 2005.

Fellow comedians have been paying tribute, including Jennifer Saunders who tweeted: "Can't believe Vic has gone. She was truly an inspiration and had so much left to to give and we won't see it. She was so funny."

Sir Lenny Henry said: "I am devastated - this is very, very sad news. Victoria will be sorely missed. Always funny, she worked incredibly hard. A killer stand-up and a fantastic songwriter. My condolences to all her family."

Catherine Tate said: "The news is devastating. It's so shocking and sad. We have lost an incredible talent who was a huge influence and inspiration to so many - a true game changer. "

Wood appeared on BBC One's That's Life! in 1976, which brought her into millions of homes on a frequent basis.

The show's presenter and Childline founder Dame Esther Rantzen was also among those who paid tribute.

BBC director general Tony Hall said: "Victoria Wood was a woman with a stunning array of talents - a comedian, singer, songwriter, actress and director. People identified with her warmth and great charm.

"She brought people from all walks of life together and made them laugh and cry. She will be greatly missed and our thoughts are with her friends and family."

British Prime Minister David Cameron paid tribute saying: "Victoria Wood was a national treasure loved by millions. My thoughts are with her family".

Wood also broke records with her stand-up tours, where her live comedy was interspersed with original comedy songs performed at the piano and won her British Comedy Awards in 1990 and 2001.

She performed a record-breaking 15 nights at the Royal Albert Hall in 1993 as part of a six-month tour of the country - something her brother Chris was very proud of.

"The best thing for me was when she played the Albert Hall," he told the BBC. "I was very used to seeing her do her stand up in smaller halls and theatres but for her to be able to come on stage on her own and entertain, control and use an audience of 15,000 was absolutely superb.

"She had a great struggle early on and had to work hard for years to breakthrough, it was her single-minded drive to succeed in the business that pulled her through."

Wood did a lot of charity work and visited Ethiopia in 1990 and Zimbabwe in 1998 for Comic Relief. She also won The Great Comic Relief Bake Off in 2015.

The star also made documentaries including Victoria's Empire about the British Empire and Victoria Wood's Big Fat Documentary about the diet industry.

Wood married magician Geoffrey Durham, known as the Great Soprendo, in 1980 - and divorced in 2002. She is survived by her two children, Grace and Henry.