In a world first, a quadriplegic man can once again move his fingers after a chip was implanted in his brain. 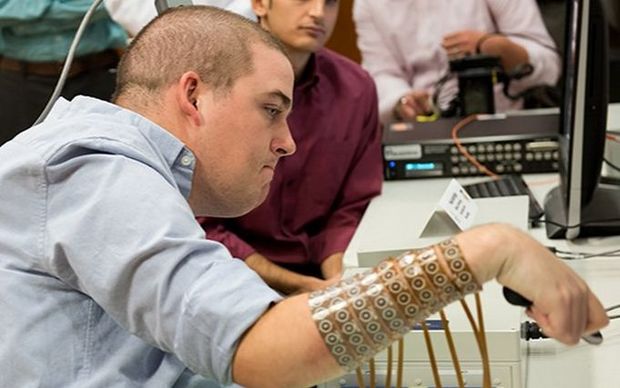 Ian Burkhart, 24, from Ohio in the US can even move individual fingers to play a guitar-based computer game.

The chip reads brain signals, which are interpreted by a computer. It then precisely stimulates his muscles with electricity to restore movement.

The researchers hope the technology will eventually help millions of people with paralysis, stroke or brain damage.

Ian was seriously injured in a diving accident nearly six years ago.

The damage to his spinal cord left messages from his brain unable to reach the rest of his body and he was paralysed below the elbows and left unable to walk.

But now he is celebrating the "big shock" of being able to move his hand again after a procedure at Ohio State University.

A sensor was implanted inside his brain to read the activity of hundreds of neurons in his motor cortex.

It then took hours of practice to teach a sophisticated computer program how to understand the myriad signals in his brain.

Ian also wore a stimulating sleeve with 130 electrodes primed to stimulate and contract different muscles in his right arm.

The results, published in the journal Nature, showed he can grasp and move large objects, pour the contents of a glass and even swipe a credit card.

Ian described the early sessions as like seven-hour exams that left him "completely and mentally fatigued and exhausted".

"You really have to break down each part of that motion and think about it in a more concentrated way. For the first 19 years of my life it was something I definitely took for granted." 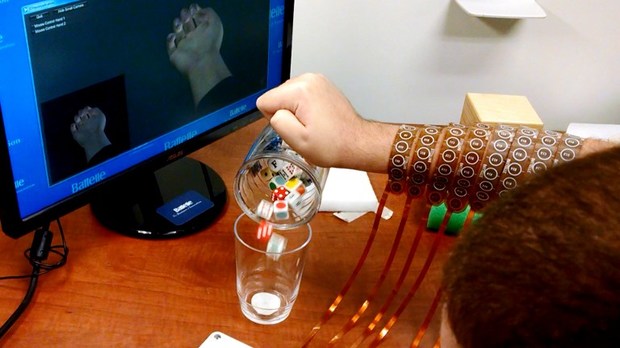 However, with practice he is learning new movements more quickly.

Ian is now dreaming of regaining the full function of both his hands as "that allows you to be a lot more independent and not have to rely on people for simple day-to-day tasks".

The study marks a significant moment in the field of using computers to bypass spinal cord injuries.

In 2012, a woman used her own thoughts to control a robotic arm, but now patients can control their own body again.

Dr Ali Rezai, the neurosurgeon who implanted the brain chip, said: "We're thrilled that Ian has progressed significantly with this technology.

"This really provides hope, we believe, for many patients in the future as this technology evolves and matures to help people who have disabilities from spinal cord injury or traumatic brain injury or stroke to allow them to be more functional and more independent."

One of the big challenges for the field will be to turn the spectacular feats in the laboratory into something that can be used in everyday life.

The approach requires surgery and then there are lots of trailing and bulky cables. It also needs a large computer to perform the complex algorithms to read the brain.

Also Ian's movements are not as deft as natural movement, even if they would have been unthinkable immediately after his accident.

However, the motor cortex has millions of neurons and only a few hundred are being read by the chip. It is hoped improvements in the technology will get closer to restoring true full function.