President Dilma Rousseff of Brazil has denounced a "coup" plot against her, suggesting that Vice-President Michel Temer is one of the "conspirators".

The president - who is facing impeachment in the national Congress - hinted that he was one of the ringleaders of a plot to overthrow her.

She said an audio message released on Monday by Mr Temer, whom she did not name, was evidence of the conspiracy. 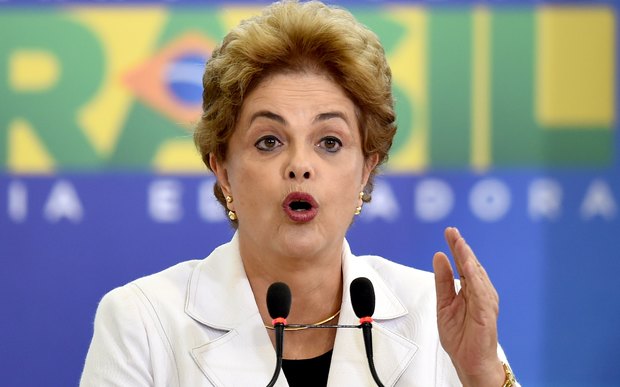 In the message, Mr Temer appeared to accept replacing her as president.

He also called for a government of national unity.

Correspondents said that it implied that Ms Rousseff's impeachment had already happened. Mr Temer said the message was released by accident - his office said it was sent to aides erroneously.

In it he appears to be rehearsing an inaugural speech. The tape was run by Brazilian media hours before an important vote by a congressional committee to decide whether impeachment proceedings against President Rousseff should continue.

"Many people sought me out so that I would give at least preliminary remarks to the Brazilian nation, which I am doing with modesty, caution and moderation," he said on the recording. 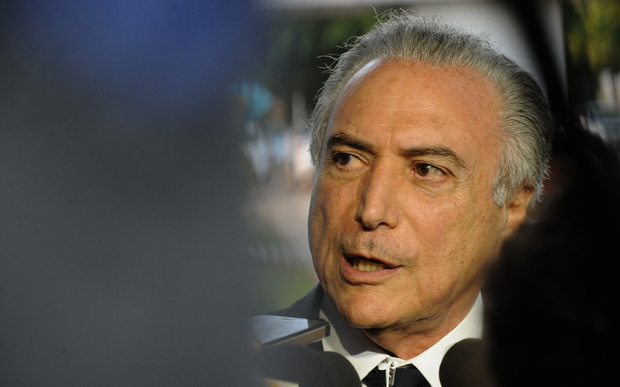 An audio message appeared to be of Vice-President Michel Temer rehearsing an inaugural speech. Photo: AFP

The BBC's Wyre Davies in Brazil said that, given the fact that Mr Temer may also face impeachment proceedings, his words appear somewhat premature.

The 65-member congressional committee voted 38 to 27 to recommend going ahead with impeachment proceedings.

All eyes will now be on a full vote in the lower house starting on Sunday in the capital Brasilia.

Security will be stepped up around the Congress building, with thousands of police deployed in the area, local media report.

"They now are conspiring openly, in the light of day, to destabilise a legitimately elected president," Ms Rousseff said.

In an apparent reference to vice-president Temer and lower house speaker Eduardo Cunha she referred to "the chief and... the vice-chief" of the plot.

The president said that one was guilty of "unimaginable abuses" in the impeachment process while the other was "rubbing his hands in glee while carrying out a farcical leak of an inaugural speech".

Brazil is "living [in] strange times", she said, "times of a coup, of farce and betrayal".

President Rousseff said she was shocked by the audacity of the leak of the recording.

"One of the chief conspirators assumes the condition of president of the republic," she said.

She said the audio "reveals a betrayal of me and of democracy" and showed that Mr Temer had "arrogance and contempt for the people".

The president said "the mask of the conspirators had fallen".

President Rousseff faces impeachment over allegations that she massaged deficit figures ahead of her election campaign two years ago - accusations she denies.

While her opponents say the impeachment is supported by most Brazilians, the president's supporters have labelled it a flagrant power grab by her political enemies.

If the president and Mr Temer are both suspended from office, the next in line to assume the presidency is Mr Cunha.

However, he is facing money-laundering and other charges.

Mr Temer was until recently a close ally of Ms Rousseff but his party has formally withdrawn from government as is now supporting calls for the president's impeachment, our correspondent says.

Lower house vote: An impeachment vote is expected in the lower house on either Sunday or Monday. A two-thirds majority is required for it to go forward to the Senate. Latest surveys suggest the number in favour is short of the total needed to carry the motion.

Senate vote on trial: If Ms Rousseff case is sent to the Senate, a simple majority is enough to suspend her for up to 180 days while she is put on trial. Vice-President Michel Temer would step in during this period.

Impeachment vote: For Ms Rousseff to be removed from office permanently, two-thirds of the Senate would have to vote in favour. Mr Temer would remain president for an interim period should this happen.