The US Secretary of State made an unannounced trip to Afghanistan on Saturday to show support for the government and to try to defuse a political crisis fuelled, in part, by a national unity deal he brokered in 2014. 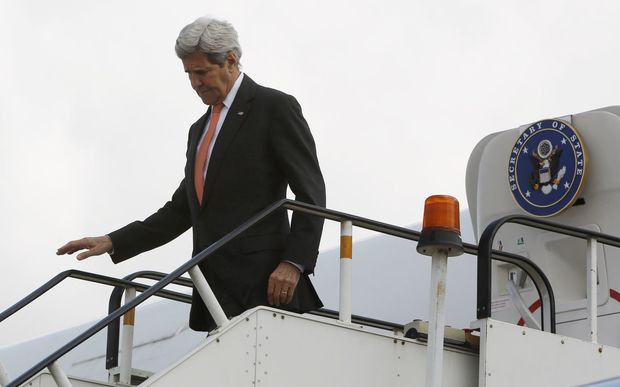 US Secretary of State John Kerry disembarks from his aircraft in a surprise visit to Afghanistan. Photo: AFP

Mr Kerry's visit comes at a difficult moment for Afghanistan, with President Ashraf Ghani's government weakened by infighting between political rivals, the economy sinking and the resurgent Taliban stronger than at any time since they were toppled from power in late 2001.

In announcing the visit, US State Department spokesman John Kirby said Kerry would "emphasize US support" for the government and its security forces, which NATO officials said fully control no more than 70 percent of Afghanistan.

At the same time, US forces in Afghanistan were due to be almost halved to 5,500 from the current 9,800 by the start of 2017, and the new commander in Afghanistan, General John Nicholson, was conducting a review of security before making his recommendations to Washington some time in June. 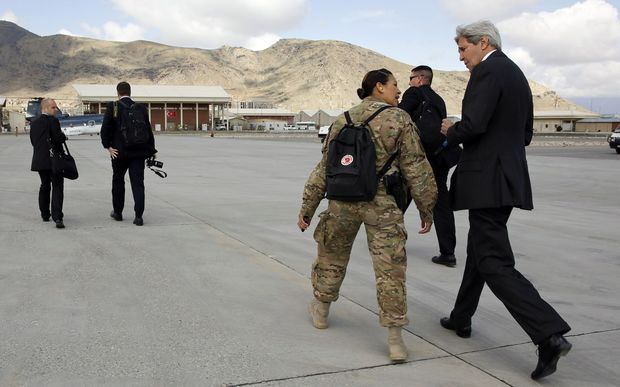 US Secretary of State John Kerry with officials in Afghanistan. Photo: AFP

The political deal Mr Kerry brokered suggested their power-sharing arrangement would end in September 2016, which has fuelled political manoeuvring in Kabul. An opposition movement close to former president Hamid Karzai was pushing to have a say on the way forward.

The legal decree that enacted the deal, however, provided no clearly binding time limit, leaving open the possibility that the National Unity government, in one form or another, could continue on for the rest of Mr Ghani's five-year mandate.

Mr Kerry was expected to make that point while in Afghanistan, a stance that US officials hoped may help quell some of the infighting.

"Though the political agreement calls for this to be a two-year agreement, the decree doesn't spell out an end date.

"We ourselves here don't view that there is going to be an end ... in September," a senior US official said on the condition of anonymity.

US special representative for Afghanistan and Pakistan Richard Olsen made a similar point more obliquely with reporters in Washington on Monday.

"The Secretary wants to signal continuing US support for the national unity government.

In July, the NATO Western security alliance was expected to decide how to fund Afghanistan's security forces in the coming years and donor nations will gather in Brussels in October to make civilian aid pledges to Afghanistan.

Noting the dates, Andrew Wilder, an Afghanistan expert at the United States Institute for Peace think tank, said "the last thing we need is a big political crisis calling into question the legitimacy of the national unity government in September".