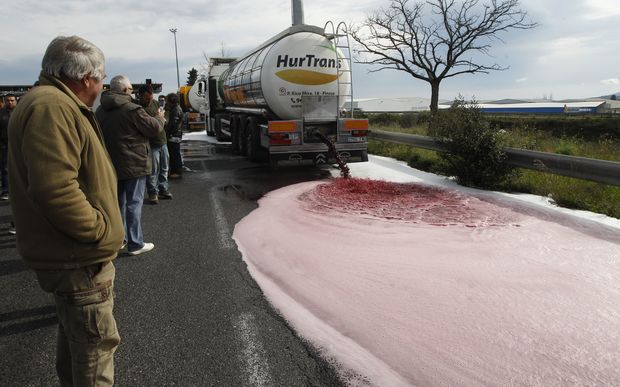 Spain said the attack by the French protesters was a "flagrant violation of various basic principles" of the European Union.

On Monday, farmers protesting against unfair competition attacked the lorries at a border crossing.

Spanish farming organisations said tens of thousands of litres of wine were dumped as five vehicles were targeted near Le Boulou, in southern France.

The Spanish government said it reported the incident to the European Commission.

"These incidents, which are occurring all too frequently, are grounds for concern for the government of Spain.

"Spain has already officially passed on its protest to the French authorities, and urges them to adopt all appropriate measures to guarantee, with absolute security, the free movement of people and goods, one of the basic principles of the European Union," the foreign ministry said in a statement. 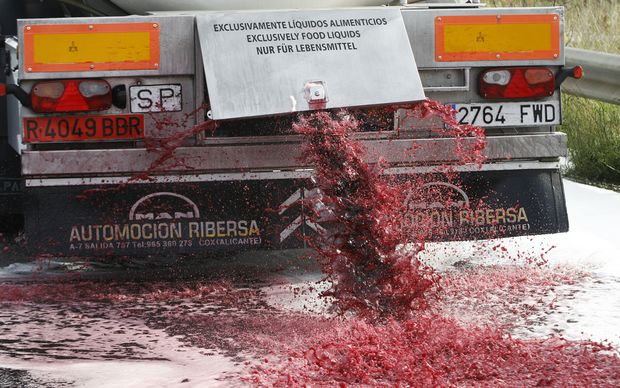 Another image from the demonstration on Monday. Photo: AFP

A Spanish association representing lorry drivers said French police had not acted to prevent the attacks.

The president of the winemakers' union of the French region of Aude, Frederic Rouanet, told the AFP news agency they would continue to protest to protect their products from cheap wine coming from Spain and Italy.