Country musician Merle Haggard, who emerged from prison to become the poetic voice of the American working man with hits such as Mama Tried and If We Make It Through December, died on his 79th birthday, his manager Frank Mull says.

Haggard died of pneumonia at his home in Palo Cedro, California. 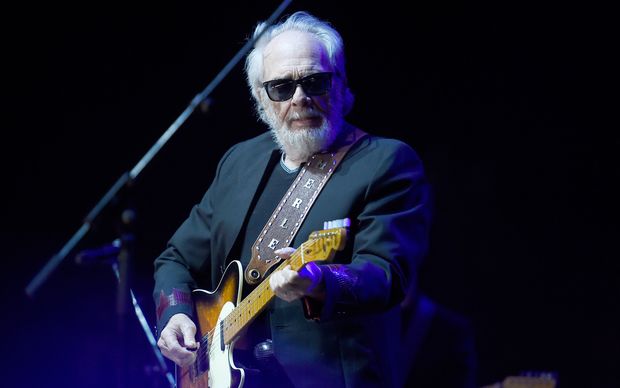 He became one of the most influential figures in country music with a repertoire that included songs with traditional country themes such as drinking and heartache, but he infused them with more insight and tenderness than most honky-tonkers. He also broadened the genre by writing about poverty, loneliness and social issues.

Haggard once said he preferred playing guitar to singing but it was his voice that made him stand out.

"Haggard's exceptionally true intonation, his command of varied vocal textures and his insinuating phrasing would make him a superior vocalist in any idiom," the New York Times said of Haggard in his prime. "Like Muddy Waters in the blues field and only a handful of other performers, he both embodies and transcends his rich American musical heritage."

Haggard's sound drew from traditional country but also touched on folk, pop, jazz, blues and rock, and his songs were covered by the likes of the Grateful Dead, Elvis Costello and Lynyrd Skynyrd.

"I can't remember when I haven't listened to him," said Rolling Stones guitarist Keith Richards. "Some of the best songs and best delivery you can get."

Haggard was born April 6, 1937, near Bakersfield, California, the son of a couple who had been part of the exodus from Oklahoma's Dust Bowl during the Great Depression. Haggard's father was a carpenter for a railroad, and the family lived in a converted boxcar.

Haggard, who was nine years old when his father died of a brain tumor, quit school in the eighth grade and began hopping freight trains. He also took up the guitar and petty crime and frequently was placed in - and escaped from - juvenile reformatories.

A few years later he was living out the lyrics of what would be one of his biggest hits - Mama Tried, the story of a man who marked his 21st birthday in prison. He had been sent to California's notorious San Quentin prison for trying to break into a cafe - too drunk to realize that at the time it was still open and serving customers.

Haggard was already a big fan of country star Lefty Frizzell when he saw Johnny Cash perform at the prison in 1958 and decided to make a career of music after being paroled almost three years into his sentence.

During his time as governor of California, Ronald Reagan pardoned Haggard for his crime.

Haggard returned to his hometown in 1960 and, along with Buck Owens, helped define what became known as the "Bakersfield sound" - a more raw, twangy-er country sound than the highly produced music that was coming out of Nashville at the time.

The subject matter of the songs Haggard wrote was more blunt than some of his fans were accustomed to - Irma Jackson was about interracial romance - and he rebelled when record company executives wanted to change his style.

"I've never been a guy that can do what people told me," he told the Times. "It's always been my nature to fight the system." 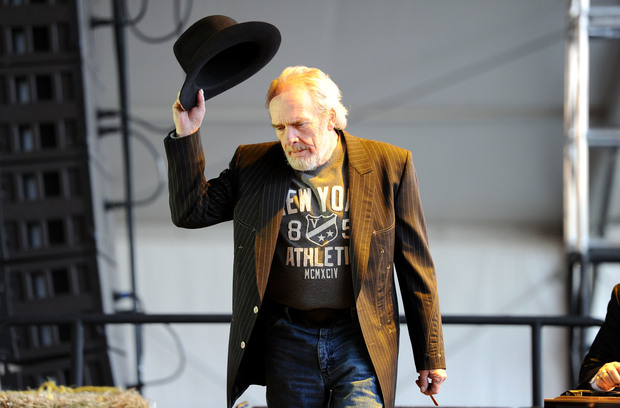 Hits such as Workin' Man Blues, Hungry Eyes and If We Make It Through December, the plaintive story of a laid-off factory worker trying to salvage Christmas for his young daughter, were likened to the populist works of Woody Guthrie.

Haggard's other hits included Lonesome Fugitive, Silver Wings, Sing Me Back Home, Daddy Frank (The Guitar Man), The Bottle Let Me Down, The Fightin' Side of Me, I Think I'll Just Stay Here and Drink, and Pancho and Lefty, a duet with Willie Nelson.

Haggard toured constantly with his band, the Strangers, and once described his life as "a 35-year bus ride" - and that was in 1996, long before his bus stopped rolling.

Haggard's fame skyrocketed in 1970 with Okie From Muskogee, an anti-hippie song ("we don't smoke marijuana in Muskogee, we don't take our trips on LSD") that came to be embraced by conservatives. Haggard said in interviews the song started out as a joke and a character study and that it did not necessarily reflect his views.

Haggard often told interviewers he was not political but his songs showed he was certainly opinionated and a libertarian thinker. In 2003 he defended the Dixie Chicks from fans' backlash after they criticized President George W. Bush and he wrote a song in tribute to former first lady Hillary Clinton when she was seeking the presidency in 2007.

He also wrote Crippled Soldiers and Me to protest the U.S. Supreme Court ruling that said burning the American flag was an expression of free speech and That's the News to criticize media coverage of the war in Iraq.

Stardom took a toll on the man known to his fans as "The Hag" and his career waned in the late 1980s amid personal problems. He filed for bankruptcy protection in 1992 after years of hard living, four divorces, gambling and bad investments. He once estimated that he had blown $100 million.

In My House of Memories he wrote of a sleepless, always-naked five-day drug binge on his houseboat with an unnamed woman singer. By his mid-60s Haggard had settled down and spent his spare time fishing on his ranch in Northern California.

Musicians turned to social media to express their condolences and pay tribute. Country singer Carrie Underwood tweeted "Merle was a pioneer...a true entertainer...a legend" while rock pioneer Jerry Lee Lewis said, "I will miss one of my best friends over all these years."

Long-time friend and frequent collaborator Willie Nelson told Entertainment Weekly, "He was my brother, my friend. I will miss him."

Haggard had part of a lung removed in 2008 because of cancer but was performing again within two months.

Haggard had six children from his five marriages, including two with his last wife, Theresa. His son Ben performed with him as lead guitarist.