A flyover under construction in the eastern Indian city of Kolkata has collapsed, killing at least 23 people and injuring others. 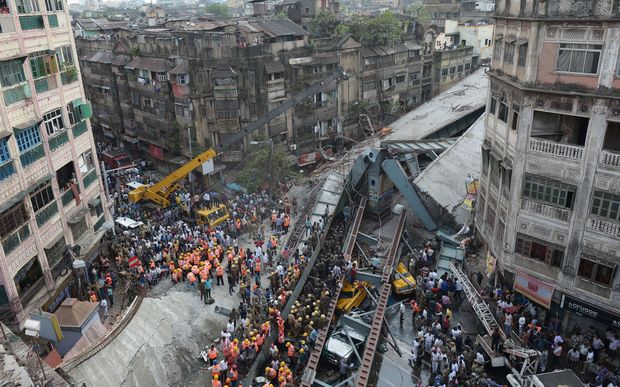 The flyover collapsed on to a busy city road Photo: AFP

Many people are feared trapped under the concrete and steel bridge, which fell on a busy road.

Safety issues such as lack of inspections and the use of substandard materials have plagued construction projects in the country.

The accident took place in an area near Girish Park, one of Kolkata's most densely populated neighbourhoods, with narrow lanes, and shops and houses built close together.

The 2km-long flyover has been under construction since 2009 and missed several deadlines for completion.

The causes of the disaster were not immediately clear but the company in charge of the construction, IVRCL, said it would cooperate with investigators.

Witnesses say other cars, buses and lorries have also been hit. People are said to have been living in makeshift homes under the flyover.

The army and national disaster agency in India have joined the rescue operation, which has been hampered by difficulties in getting ambulances and other vehicles close to the site. 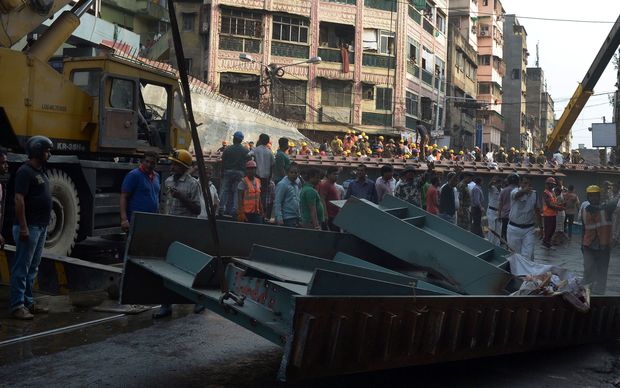 Rescuers have worked through the night to save trapped victims Photo: AFP

At least 70 injured have been taken to hospitals, officials say.

Ramesh Kejriwal, an eyewitness, told Reuters: "There was a loud sound which scared us. The concrete had been laid last night at this part of the bridge."

Another eyewitness, Ravindra Kumar Gupta, told the news agency that two buses carrying more than 100 passengers had been trapped.

"Every night, hundreds of labourers would build the flyover and they would cook and sleep near the site by day," said Mr Gupta, who together with friends pulled out six bodies.

India's Prime Minister Narendra Modi, who is in Washington in an official visit, tweeted that he was "shocked and saddened" by the collapse.

"My thoughts are with the families of those who lost their lives in Kolkata. May the injured recover at the earliest," he added.