Eighty businesses have joined a growing backlash against a new North Carolina law ending anti-discrimination protections across the state. 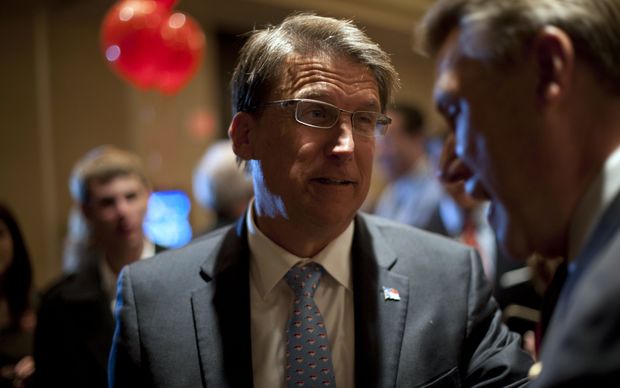 Bank of America, based in Charlotte, has joined dozens of major firms publicly objecting to the law.

Republican Governor Pat McCrory said the law was protecting privacy and based on common sense.

New York, Vermont, Washington, San Francisco and Seattle have banned travel by public employees to the state as a form of protest.

It means transgender people must use bathrooms according to the gender on their birth certificates.

What spurred legislators into action was a new ruling in Charlotte that allowed transgender people to use public toilets for the gender they identify with.

Mr McCrory defended his decision on Tuesday, saying his state has been the victim of a "vicious, nationwide smear campaign".

"Some have called our state an embarrassment," he said in a video released by his press office. "The real embarrassment is politicians not publicly respecting each other's positions on complex issues."

The law, called HB2, protects men, women and children when they use a public toilet or shower, he said.

Protests against the law have been held in Chapel Hill overnight.

Bank of America added its name to an open letter written to Mr McCrory compiled by the Human Rights Campaign (HRC), an anti-discrimination group, urging the governor to repeal the law.

"We believe that HB2 will make it far more challenging for businesses across the state to recruit and retain the nation's best and brightest workers and attract the most talented students from across the nation," the letter reads.

The company joins more than 80 chief executives who signed onto the letter, including Timothy Cook of Apple and Mark Zuckerberg of Facebook.

HB2 does not reflect the values of "our companies, of our country, or even the overwhelming majority of North Carolinians," the letter reads.

The HRC has said the law is an attack on gay and transgender people that is morally wrong.

This week, the governor of Georgia vetoed a "religious liberty" bill that would have allowed faith-based organisations to refuse service to gay and transgender people after being pressured by business interests.

After the US Supreme Court legalised same-sex marriage last year, many conservative states drew up laws in an attempt to protect the religious community.