French journalist and former UN official Florence Hartmann is being kept in isolation after being jailed for contempt, her lawyer says. 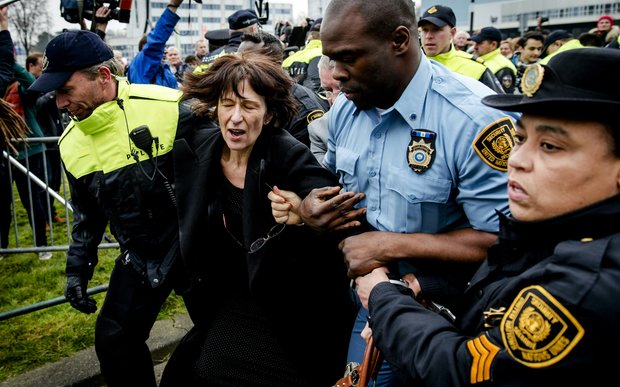 Florence Hartmann is arrested before the reading of the verdict against Bosnian Serb leader Radovan Karadzic on 24 March. Photo: AFP

Hartmann, once a spokeswoman for the International Criminal Tribunal for the Former Yugoslavia (ICTY), was arrested over a 2009 conviction for contempt for disclosing confidential documents.

She had written that the court had decided in secret not to disclose information that could have proved a link between the Serbian government and war crimes committed in Bosnia - most notably the massacre of up to 8000 Muslim men and boys at Srebrenica in 1995.

She was initially sentenced to a fine, but this changed to seven days' jail when the court ruled she had not paid.

Hartmann, 53, had insisted the money was deposited in a French account.

She was arrested on Thursday in the Hague, where she had gone for the verdict against former Bosnian Serb leader Radovan Karadzic.

Her lawyer, Guenael Mettraux, told AFP she was being kept "under suicide watch conditions, meaning with light in her cell 24 hours a day and that she is being checked on every 15 minutes by the guards" in a detention unit at the Hague tribunal.

"She is isolated from other detainees and so far has only been visited by the French consul," he said.

He had filed applications for the conditions of detention to be changed and for her early release. But he said there was literally no-one available to deal with them until after the Easter break.

Mr Mettraux told the UK's Guardian that his client had said she was in the bizarre position of "watching Gen Ratko Mladic [the Bosnian Serb military leader accused of war crimes] walking around the yard and associating with other prisoners while I'm locked away in a cage".

She wrote a book, Peace And Punishment, and an article in which she disclosed the existence of the confidential documents on Belgrade's involvement in the Bosnian war of the 1990s.