A Californian fisherman is due to be reunited with his pet dog, more than a month after the German shepherd fell overboard in the Pacific Ocean and was presumed drowned. 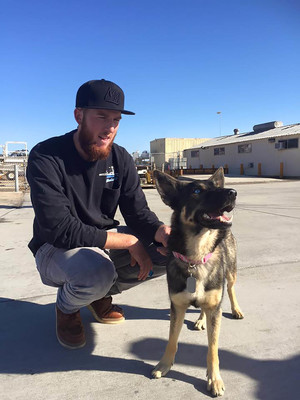 Luna with a friend of her owner, Conner Lamb Photo: AFP

The one-year-old pup, named Luna, went missing about 100km out to sea, but managed to swim to a small island used as a military training base.

Navy personnel on San Clemente spotted Luna by a road, wagging her tail.

A biologist who examined her said she was slightly thinner, and had likely survived on rodents and dead fish that had washed up.