British magician Paul Daniels has died aged 77, after being diagnosed with a brain tumour. 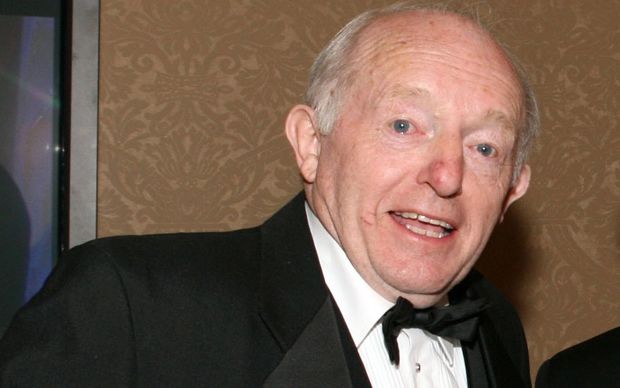 He was at his Berkshire home with wife Debbie McGee when he died in the early hours of Thursday.

"Debbie and the family would like to thank everyone for their support and asks that their privacy be respected at this sad time," his publicist said.

Illusionist Dynamo called Daniels "a true master and [his death] is just such sad news".

He then took over the primetime Saturday night slot with his BBC show, which started in 1979.

Daniels was known for a string of catchphrases, including the line: "You'll like this... not a lot, but you'll like it."

BBC correspondent Nick Higham said: "Paul Daniels could be chippy and some thought him smug. He fell out with BBC managers who dropped his show in the 1990s.

"But there was no doubting his popularity - or his talent."

He had recently returned from hospital to his Berkshire home, having been diagnosed in February. It was initially suspected he had suffered a stroke after he fell at home, but it was then discovered he had an inoperable tumour.

His son, Martin Daniels, said at the time: "He has said before, 'When it's your time it's your time' and that's how he is trying to face up to things."

As well as Ms McGee, who had been his on-stage assistant, Daniels leaves his three sons from a previous marriage - Martin, Paul and Gary.

In addition to his magic, Daniels presented game shows in the 1980s and '90s, including Wipeout, Every Second Counts and Odd One Out.

He also designed special effects for the stage productions of Cats and Phantom Of The Opera, and was commissioned by the English National Ballet to create magical effects for The Nutcracker.

Daniels had continued touring with his magic show and was booked to perform at venues across the UK this year, according to his website, before news of his illness emerged.

He supported a number of charities during his life, taking part in fundraising events and entertaining children at Great Ormond Street Hospital.

A fundraising website has been set up by his family to raise money for charities, including a brain tumour charity and the Royal Berks charity, based at the Reading hospital which treated Daniels.

The Magic Circle said Daniels had "been an inspiration to many magicians" and is of "legendary status" in the world of magic.

In a statement, it said: "At the height of his career The Paul Daniels Magic Show on BBC One pulled more than 20 million viewers - that was more than one third of the British population regularly tuning in on a Saturday night to watch a magician make them laugh and witness feats of wonder such as his famous Chop Cup routine.

"In this day and age of fragmented media platforms, no other magician is likely to be able to achieve such a TV ratings record."

It added that "the magic world owes Paul a huge debt".

Magician Dynamo told the BBC: "Without Paul Daniels I don't think I'd be doing magic today, so it's really a testament to how important he is for the magic world, he was a true master and [his death] is just such sad news.

"He was a real personality, he didn't just perform a bunch of tricks, he knew how to take something and make it magical but humorous at the same time.

"He had his own style which I don't think anybody could ever emulate or recreate. Paul Daniels for me is probably the best magician Britain has ever had. He has such an amazing legacy in magic."

Daniels' nephew James Phelan, also a magician, told the BBC news channel his uncle was a "force of nature" who made it his life's work to "entertain people and make them laugh". He added: "Right up to the last day or two, he's still been doing that."

Uri Geller told BBC Radio 5 live: "Our careers started off by him trying to debunk me and so we had a kind of a row in the early '70s, but then it turned into a very, very close friendship and I'm saddened for his family but that's life, and life must go on."

Ola Jordan, who danced with Daniels when he appeared on Strictly Come Dancing, tweeted that it had been "a pleasure and honour" to work with her "amazing dance partner".