The Islamic State (IS) group has committed genocide against Yazidis, Christians and Shia Muslims, claims the United States. 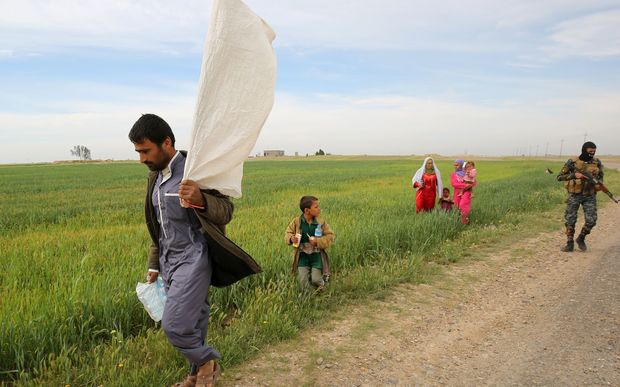 An Iraqi man carries a makeshift white flag as he flees the fighting with his family. Photo: AFP

US Secretary of State John Kerry said IS was "genocidal by self-proclamation, by ideology and by actions".

He also said the group was responsible for crimes against humanity and ethnic cleansing in areas it controls in Syria and Iraq.

"Naming these crimes is important, but what is essential is to stop them," Mr Kerry said.

Mr Kerry admitted that a lack of access to IS areas meant the US did not have a "complete picture" of the atrocities that had been carried out.

He said the "full facts" must be sought by an independent international investigation.

The US, he went on, would "strongly support" efforts to collect evidence of IS atrocities and brings those responsible to account.

"This is the message it conveys to children under its control. Its entire world view is based on eliminating those who do not subscribe to its perverse ideology."

Genocide is defined by the UN Convention as "acts committed with intent to destroy, in whole or in part, a national, ethnic, racial or religious group".

It is understood by most to be the gravest crime against humanity it is possible to commit.

It is only the second time that the US administration has declared a genocide during a conflict. The previous time was in 2004 when then-Secretary of State Colin Powell used it to describe the killings in Darfur.

Mr Kerry had been given a congressional deadline of 17 March to announce whether IS's actions in areas under its control constituted genocide.

Earlier this week, the US House of Representatives voted 393-0 to designate the crimes as genocide.

The vote, and Mr Kerry's comments, do not obligate the US to take any particular action.

Mr Kerry said he hoped the groups who had suffered at the hands of IS would take comfort in the fact that "the United States recognises and confirms the despicable nature of the crimes committed against them".