Lebanon is to temporarily reopen a landfill site and set up two new sites in a bid to end an eight-month crisis over uncollected rubbish in Beirut.

Piles of rotting refuse in the city's streets have prompted a mass anti-government movement. 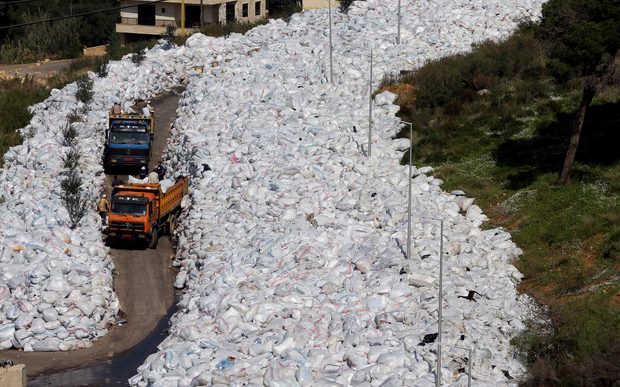 Rubbish trucks drive between a built-up pile of waste in Beirut on 25 February. Photo: AFP

Officials say the new move will solve the problem for the next four years while a permanent solution is found.

But protesters have gathered in Beirut, threatening to paralyse the country from Monday.

The crisis began with the closure of Beirut's main landfill site at Naameh last July, with no alternative in place.

During hot summer weather, piles of rubbish grew so large that residents resorted to burning it on the streets, releasing toxic fumes.

The rubbish has since piled up on beaches, in mountain forests and along river beds.

Protesters blame the crisis on political paralysis and corruption and set up a "You Stink" movement. Last year, many took to the streets, leading to violent clashes with police.

Information Minister Ramzi Jreij said on Saturday that the Naameh landfill would reopen for two months "to take in the rubbish that has already piled up".

Speaking after an emergency cabinet session, he said that two other "temporary" landfills would be opened in the city's suburbs.

During the meeting, about 3000 demonstrators from the You Stink movement marched to central Beirut demanding a permanent solution to the crisis.

"The final warning has been sent, and we are now in a new phase. On Monday we will paralyse the country," protest organisers said in a statement.

Earlier this month, the group posted pictures on its Facebook page of mountains of rubbish festering across Lebanon.

One video filmed by a drone showed bags of rubbish stretching for miles like a flowing river.

The footage also mocked Lebanon's tourism ministry over a video it had commissioned on Lebanon's natural beauty.