But activists criticised the remarks, saying they masked an ugly legacy. 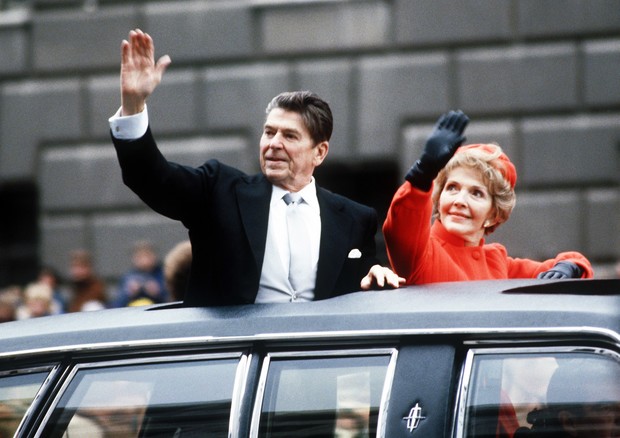 Ronald and Nancy Reagan wave to the crowd down Pennsylvania Avenue, in Washington DC, on 20 January 1981. Photo: F&A Archive / The Art Archive / The Picture Desk

The row came as diplomats, politicians and celebrities attended the funeral of Mrs Reagan, who died this week aged 94.

In an interview with MSNBC, Mrs Clinton praised both Nancy and Ronald Reagan for their "low key advocacy" around Aids.

"It may be hard for your viewers to remember how difficult it was for people to talk about HIV/Aids in the 1980s," Mrs Clinton said. "And because of both President and Mrs Reagan - in particular Mrs Reagan - we started a national conversation."

Many historians and Aids activists responded by pointing out that the Reagan administration was famous for being too slow to respond to the Aids crisis, and too callous when it did.

"Hillary Clinton needs to walk this back immediately or she risks losing the votes of millions of queer Americans who survived the plague," Dan Savage wrote in a blog post at The Stranger.

"We watched our friends and lovers die by the tens of thousands while Nancy and Ronnie sat silently in the White House.

"I'm literally shaking as I try to write this. There are no words for the pain Clinton's remarks have dredged up. I'm supposed to be writing a column - it's way overdue - but all I can think about right now are all of my dead friends, lovely guys who might still be with us if Nancy and Ronald Reagan had started a national conversation about HIV/Aids."

Chris Geidner at Buzzfeed recently wrote a long article about how Nancy Reagan denied a personal plea from Rock Hudson for access to an Aids treatment facility.

On Twitter, he wrote "The White House did not decide that Aids would be an issue to 'get into' until nearly two years after Hudson's death," in 1985.

Ronald Reagan made his first public speech about Aids in 1987.

Others cited a 1982 press conference where White House spokesman Larry Speakes laughed off a reporter's questions about Aids.

"This was the 'national conversation' that the Reagans started about Aids: laughing at the victims of a 'gay plague'," wrote science writer Steve Silberman.

Peter Staley, an Aids activist who came to prominence during the Reagan administration, tweeted his disbelief at Clinton's remarks. "Did a BernieBro possess @HillaryClinton to say the most offensive thing possible 4 my generation of LGBT Americans?"

After a few hours of online outrage, Clinton tweeted an apology:

"While the Reagans were strong advocates for stem cell research and finding a cure for Alzheimer's disease, I misspoke about their records on HIV and Aids. For that, I am sorry."

But the damage has been done.

"Insulting to imply that advocacy for Alzheimer's long after out of office in any way balances Reagan Aids record," wrote New York Magazine's Frank Rich.