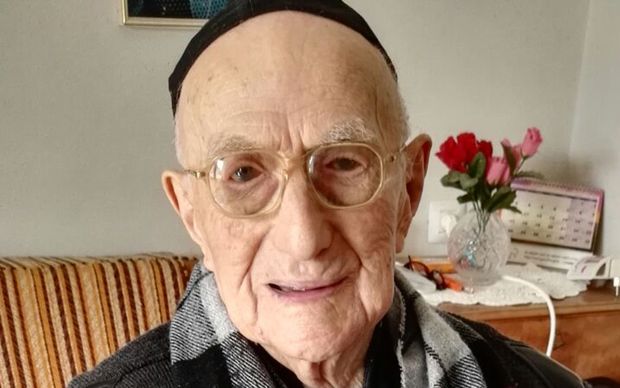 According to the The Guinness World Records Yisrael Kristal,112, is the world's oldest man. Pictured at home in the Israeli city of Haifa. 21 January 2016. Photo: AFP

Yisrael Kristal was born near Zarnow in Poland in 1903 and lived through two world wars before moving to the Israeli city of Haifa.

As he received his Guinness World Records certificate, Mr Kristal said he did not know the "secret for long life" and that he believed everything was "determined from above".

"There have been smarter, stronger and better-looking men then me who are no longer alive.

"All that is left for us to do is to keep on working as hard as we can and rebuild what is lost," he said.

The son of a religious scholar, Mr Kristal was separated from his parents during World War I. He later moved to Lodz to work in the family confectionary business.

After the invasion of Poland by Nazi Germany in 1939, Mr Kristal and his family were moved into the Lodz ghetto.

His two children died there and Mr Kristal and his wife Chaja Feige Frucht were sent to Auschwitz in 1944 after the ghetto was liquidated, the Jerusalem Post reports.

Mr Kristal's wife was murdered in Auschwitz but he survived, and performed slave labour in that and other camps. When he was found by the Allies in May 1945, he weighed just 37kg.

The sole survivor of his family, Mr Kristal emigrated to Israel in 1950 with his second wife and their son, where he continued to run his confectionary business until his retirement.

His daughter, Shula Kuperstoch, said the Holocaust had not affected her father's beliefs.

"He is optimistic, wise, and he values what he has," she told the Jerusalem Post.

The oldest person alive today is believed to be an American woman, Susannah Mushatt Jones, who is 115 years and 249 days.

The oldest person ever to have lived is thought to be Jeanne Calment from France, who died aged 122 years and 164 days.