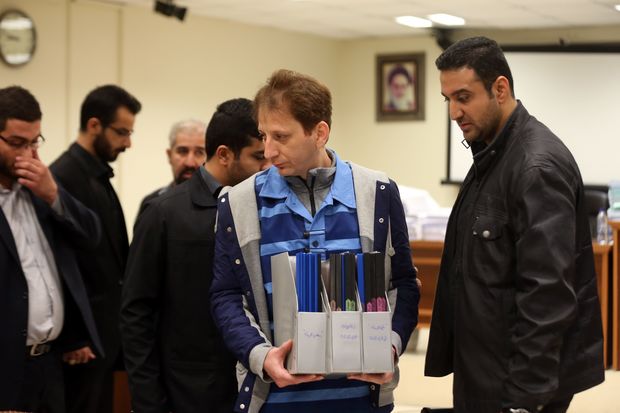 He was arrested in December 2013 after accusations that he withheld billions in oil revenue channelled through his companies. He denies the allegations.

Zanjani, 42, was convicted of fraud and economic crimes, a judiciary spokesperson said at a news conference.

One of Iran's richest men, Zanjani was blacklisted by the US and EU for helping Iran evade oil sanctions.

Two others were sentenced to death along with him and all were ordered to repay embezzled funds. The ruling can be appealed.

In a separate development, a cargo of Iranian crude oil arrived at a Spanish refinery in San Roque on Sunday, the first delivery to an EU state since sanctions were lifted.

A lawyer for Zanjani, Zohreh Rezalee, told the BBC the verdict was politically motivated and an appeal would be lodged.

"We believe that Babak Zanjani in this case is just a debtor," he said.

Zanjani had acknowledged using a web of companies in the United Arab Emirates, Turkey, and Malaysia to sell millions of barrels of Iranian oil on behalf of the government since 2010.

Before his arrest, Zanjani had argued that international sanctions were preventing him from handing over $US1.2 billion still owed to the government.

But, at his recent trial, prosecutors said he still owed the government more than $US2.7b in oil revenue.

He was taken into custody a day after President Hassan Rouhani ordered his government to fight "financial corruption", particularly "privileged figures" who had "taken advantage of economic sanctions" under the previous government.

The trial, unusually, was held in public, AFP reported.

In a 2013 interview with the BBC, Zanjani played down his political connections in Iran. He said "I don't do anything political, I just do business."

Zanjani has said he is worth about some $US13.5b.

For years, things worked well for the businessman who appeared in photos with some high-ranking officials and was not shy of showing off his wealth, such as private jets and luxury cars, BBC correspondent Amir Azimi said.

But when the local media started to report on his wealth, he came under the spotlight and under suspicion.

Zanjani was convicted of "corruption on earth", the most serious offence in Iran's criminal code.

Other wealthy individuals have been executed after being found guilty of similar charges.

In May 2014, businessman Mahafarid Amir-Khosravi was hanged after being convicted of embezzling billions of dollars.