Presidential contender Donald Trump has come under attack at a Republican debate, hours after being hammered by some of the party's veteran politicians. 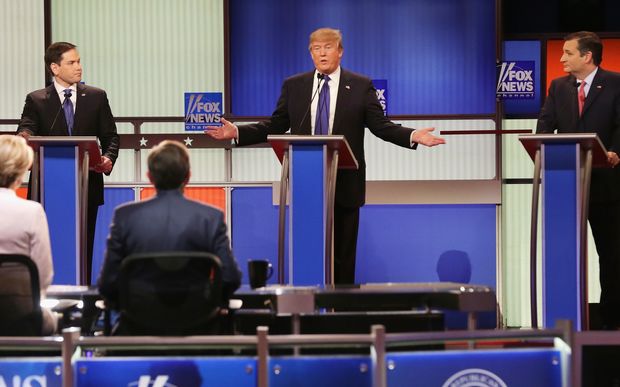 Donald Trump took centre stage at the most recent debate among Republicans looking to become the candidate for US President Photo: AFP

The front-runner in the Republican race was on the defensive in Detroit as Marco Rubio and Ted Cruz piled in.

In a testy debate, Mr Trump admitted he changed his stance on issues but said flexibility was a strength.

Senior Republicans say Mr Trump is a liability who would lose the election.

The debate hosted by Fox News began with Mr Trump being asked about an attack earlier in the day by Mitt Romney, the 2012 nominee, who accused the businessman of bullying, greed and misogyny.

Mr Trump dismissed Mr Romney as a "failed candidate", but he immediately found himself on the defensive from Mr Rubio.

The Florida senator said he was "not going to turn over the conservative movement to someone who thinks the nuclear triad is a rock band from the 1980s".

Mr Rubio also challenged Mr Trump on outsourcing his clothes line to China and Mexico, which saw the businessman promise to move clothing manufacturing back to the US, while Mr Cruz said Mr Trump has been part of the corruption in Washington that his supporters are angry about.

In one of the most bizarre moments, Mr Trump defended the size of his hands and then quipped about another part of his anatomy.

There were plenty of personal insults from Mr Trump, who labelled one rival "little Rubio" and another "liar Ted".

The New York businessman was forced to explain a civil lawsuit involving the collapse of Trump University.

Mr Trump was also challenged by the Fox News panel for changing his stance on Syrian refugees, the war in Afghanistan and President George W Bush.

He replied: "I have a very strong core. But I've never seen a successful person who wasn't flexible, who didn't have a certain degree of flexibility."

"Think of Donald Trump's personal qualities, the bullying, the greed, the showing off, the misogyny, the absurd third grade theatrics," said Mr Romney.

The former standard-bearer of the party said Mr Trump's policies - such as the deportation of undocumented migrants and banning Muslims from entering the US - would make the world less safe. 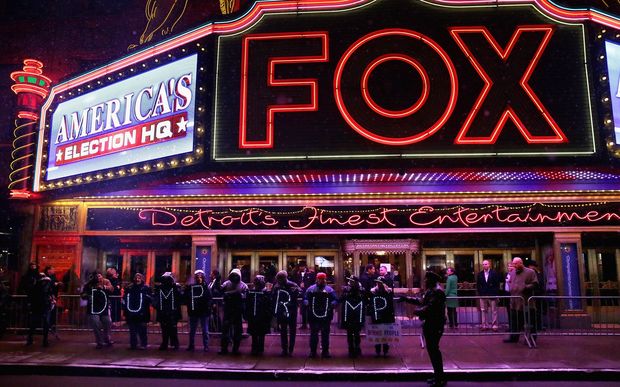 The debate venue at the Fox Theatre in Detroit. Photo: AFP

Mr Trump has sought to present himself as a "unifier", after his victories in seven states on so-called Super Tuesday consolidated his position at the front of the race for his party's nomination.

But Mr Romney, who has been a fierce critic of Mr Trump, warned in his speech on Thursday that his policies were a threat to the Republican party and to the country as a whole. 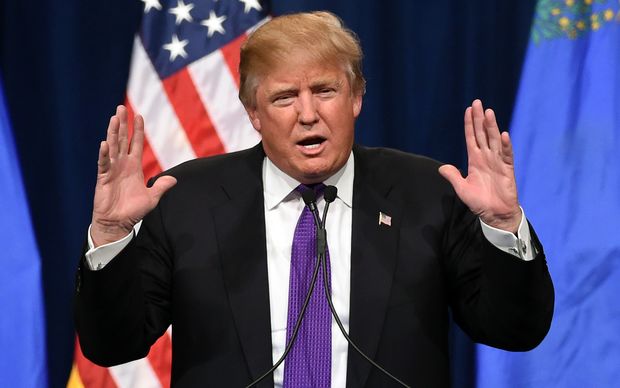 He criticised the billionaire's policies on tax and his promises to launch a trade war, citing Mr Trump's track record with bankruptcies.

"Here's what I know: Donald Trump is a phoney, a fraud," Mr Romney said.

"His promises are as worthless as a degree from Trump University."

He attacked Mr Trump's controversial immigration policies, saying he was creating "scapegoats of Muslims and Mexican immigrants" - in reference to his proposal to build a wall between America and Mexico and halt all immigration of non-citizen Muslims into the US.

Mr Romney also warned that the nomination of Mr Trump would pave the way to the presidency for Democratic rival Hillary Clinton.

Other senior Republicans such as Paul Ryan, John McCain and a host of national security committee members have also attacked Mr Trump since he cemented his front-runner status on Super Tuesday.

Mr Rubio has indicated that the Republican establishment was unlikely to back the former reality TV star.

"If this was anybody else as a front-runner, there'd be people right now saying 'Let's all rally around the front-runner'," he said, adding, "that will never happen with Donald Trump".

According to the New York Times, some party donors are already trying to raise funds for an anti-Trump effort. 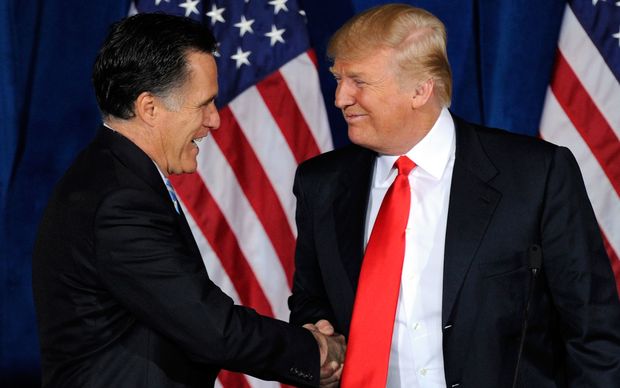 Mr Trump, a billionaire with no experience of political office, has won 10 of the 15 states that have voted so far, with his promise to "make America great again".

With the effective departure of Ben Carson this week, the field of Republican candidates - once 17-strong - has now been narrowed to four.

The fourth Republican still competing, John Kasich, is hopeful he can win in his home state of Ohio, where voters go to the polls on 15 March.

This morning Mr Trump predicted he would be assailed from all sides in the debate.

"I can't act overly presidential because I'm going to have people attacking from every side," he told NBC.

"A very good man, Ben Carson, is not there any more, so now we're going to have more time for the fighting."

He was also dismissive of Mr Romney's criticisms, describing him as a failed candidate who once begged for Mr Trump's endorsement.

The debate, sponsored by Fox News, is the first time Mr Trump will face his rivals since winning seven states on Super Tuesday.

It will bring him face to face with presenter Megyn Kelly, whom he dismissed as a "bimbo" after they clashed in the first primary debate.

The incident prompted him to boycott a subsequent debate hosted by Fox.

The two will take to the debate stage in Flint, Michigan, on Sunday.