Spotlight has been named best picture at the 2016 Academy Awards, with Leonardo DiCaprio finally taking home the best actor gong. 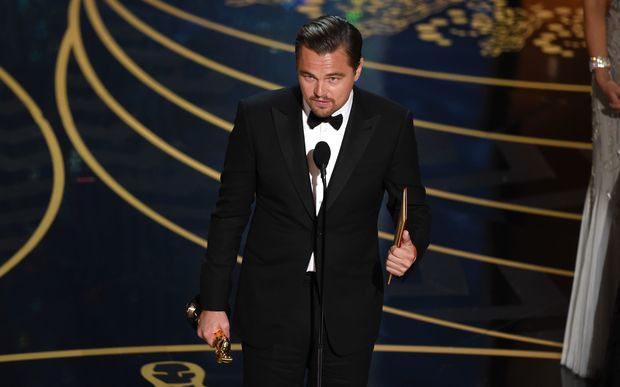 DiCaprio was widely tipped to win for his role in The Revenant, but Spotlight's win took many by surprise at the 88th Academy Awards at LA's Dolby Theatre.

DiCaprio received a standing ovation as he picked up his award, having had five acting nominations and one nomination as producer of best picture nominee Wolf of Wall Street.

He said making The Revenant was "about man's relationship to the natural world".

"Climate change is real - it is happening right now," he said. "It is the most urgent threat right now to our entire species and we need to work now.

Ms Vanderwalt told her friends and family back in New Zealand to "pop the corks" because she's bringing home gold from the Oscars.

The stylist drove a team of 35 producing the hairstyles, make-up and stuck-on body parts in Mad Max: Fury Road.

She shared the Oscar for best make-up and hair styling with Mad Max team members Damian Martin and Elka Wardega, who all spent seven months filming the post-apocalyptic action movie over seven months in Namibia. 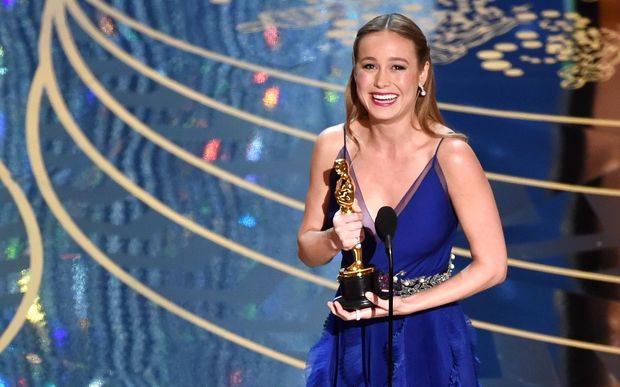 Inarritu said it was a "great opportunity to our generation to liberate ourselves from all prejudice", saying the colour of someone's skin should be "as irrelevant as the length of their hair".

It is the fourth Oscar for Inarritu, having won best director, best original screenplay (as co-writer) and best picture (as producer) for Birdman in 2015.

Rylance, who won for his portrayal of Rudolf Abel, the real-life Soviet intelligence officer who was arrested in 1950s New York and prosecuted as a spy, said: "I've always just adored stories, hearing them, seeing them, being in them.

"So, for me to have the chance to work with one of the greatest storytellers of our time, Steven Spielberg, has just been such an honour."

Rylance, who beat off competition from Sylvester Stallone, Mark Ruffalo and fellow Brits Christian Bale and Tom Hardy, added: "It's a wonderful time to be an actor and I'm proud to be part of it."

Singer Sam Smith, who won the best original song Oscar for Writing's on the Wall, from Bond film Spectre, said he could not breathe as he picked up his award and told his fellow nominees they were "incredible".

He said: "I read an article by Sir Ian McKellen saying no openly gay man had ever won an Oscar.

"If this the case, even if this isn't the case, I'd like to dedicate this to all the LGBT [lesbian, gay, bisexual and transgender] community around the world.

"I stand here tonight as a proud gay man and I hope we can all stand together one day." 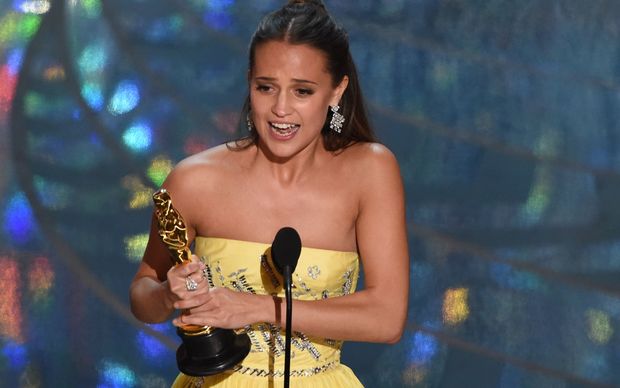 The Swedish-born actress thanked her co-star, British actor Eddie Redmayne, and her parents, after winning her first Oscar, saying: "Eddie, thank you for being the best acting partner. I could never have done it without you. You raised my game.

"My mum and dad, thank you for giving me the belief that anything can happen - even though I would never have believed this."

Gay-Rees added: "This is for the fans who loved her through thick and thin, that's all she ever needed."

Composer Ennio Morricone won the Oscar for best original film score for The Hateful Eight. It is the first Oscar that the 87-year-old has won.

He dedicated the award to his wife, Maria.

Irish director Benjamin Cleary won the best live action short Oscar for Stutterer, which is about a man with a severe stammer.

The best foreign language film Oscar went to Hungarian film Son of Saul. It tells the story of a Jewish man forced to work at a Nazi death camp who seeks a proper religious burial for a boy who he believes is his son. It was Hungarian-French director Laszlo Nemes' first full-length film.

Emmanuel Lubezki won his third Oscar for cinematography in a row, having won in 2015 for Birdman and 2014 for Gravity.

Lady Gaga was given a standing ovation for her performance of Til it Happens to You from The Hunting Ground, for which she was nominated for best original song.

The singer, who was introduced by US vice president Joe Biden, was joined on stage by survivors of sexual abuse. Many of the audience members appeared to have been moved to tears by the song.

Smith, The Weeknd and Dave Grohl have also performed during the Hollywood ceremony. 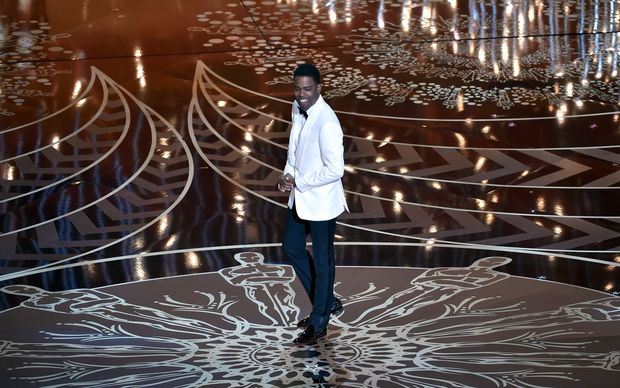 The ceremony was boycotted by some Hollywood figures protesting about the lack of ethnic diversity among this year's nominees. All 20 nominees in the best acting or supporting acting categories are white.

Host Chris Rock launched the show by addressing the race controversy head on.

He commented he had "counted at least 15 black people" in the montage that opened the ceremony, before welcoming people to the "white People's Choice awards".

"You realise if they nominated hosts, I wouldn't even get this job," he quipped. "Y'all would be watching Neil Patrick Harris right now."

Rock added: "Everyone wants to know is Hollywood racist? You have to go at it the right way. Is it burning-cross racist? Fetch-me-some-lemonade racist? No.

"It's a different kind of racist. Is Hollywood racist? You're damn right it's racist but it's sorority racist."

Actress in Supporting Role - Alicia Vikander for The Danish Girl

Best Animated Feature Film - Inside Out

Actor in Supporting Role - Mark Rylance for Bridge of Spies

Documentary (Short Subject) - A Girl in the River: The Price of Forgiveness

Actor in a Leading Role - Leonardo DiCaprio, The Revenant