A mass shooting has taken place in the US state of Kansas with four people killed, including the gunman, and 14 wounded.

The gunman was an employee at a lawnmower factory in the town of Hesston, police said.

The man, identified as Cedric Ford, 38, was killed by officers. 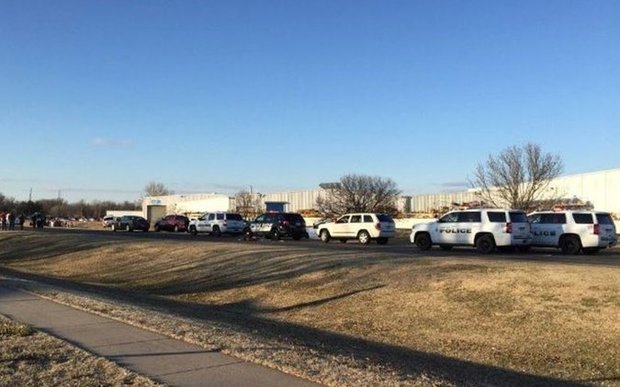 There have been fatalities and multiple casualties at a Kansas factory shooting. Photo: twitter

The gunman appeared to have opened fire at three locations before entering the building of Excel Industries, where he worked, Harvey County Sheriff T Walton said at a news conference.

He began his attacks about 5pm local time in the town of Newton, where a man driving a truck was shot in the shoulder, Mr Walton said.

Soon after, he shot a person in the leg on another street on the way to his worksite at Excel Industries in Hesston, 14 km northwest of Newton, where he opened fire again in the parking lot, Mr Walton said.

The gunman entered Excel Industries and continued his shooting spree, the sheriff said.

"This is just a horrible incident that's happened here," Mr Walton said. "There are going to be a lot of sad people before this is all over."

The shooter killed three people and wounded 14 others, 10 critically, before he was killed by authorities, authorities have said.

The series of shootings comes less than a week after a Michigan man who worked as a driver for car-hailing service Uber was charged with killing six people during a shooting rampage.

A number of mass shootings in the US has elevated gun control as a campaign issue in the November presidential election.

A spokesman for the local Via Christi Hospital St Francis said they had taken in six patients from the shooting, with five in serious condition and one in fair condition.

Factory employee Martin Espinoza said the gunman had tried to shoot him.

The gunman pointed his gun at Mr Espinoza and pulled the trigger but the weapon was empty and he ran away as he took out a second gun, he said.

Another witness described scenes of panic.

"All I know is I'm seeing people running and so I'm assuming fire, and so I take a few steps and I hear pop, pop," he said.

"And I'm thinking just some paint cans or something going up, and more people running and all of a sudden, pop, pop, pop ... and I'm going, ahh, I start running too."