More than $1 billion worth of liquid methamphetamine has been seized in Australia from a shipment of stick-on gel bras and storage units filled with art supplies, in what authorities called the largest such seizure history. 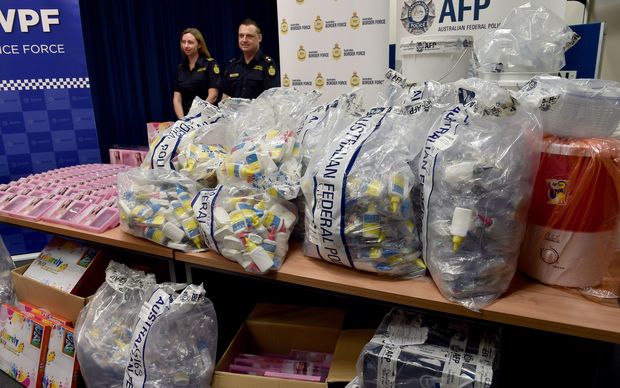 Four people have been charged over the importation and manufacture of 720 litres of methamphetamine.

Authorities discovered the drugs in a shipment from Asia to Australia and found the remainder in storage units in Sydney.

The ice was allegedly hidden in stick-on 'water magic' push up bras, bottles of craft glue and painting sets.

"This is also one of the largest drug seizures in our country," he said.

"This has resulted in 3.6 million individual hits of ice being taken off our streets with a street value of $1.26 billion.

"And we are here to laud the joint operation that has resulted in the largest seizure of liquid methamphetamine in Australia's history."

"These drugs were concealed inside art supplies housed in five storage units in Sydney in the suburbs of Miranda, Hurstville, Padstow and Kingsgrove," he said.

Commander Sheehan said several people had been arrested over the drug seizures.

"In January this year, the joint organised crime group conducted a controlled operation resulting in the arrest of a 33-year-old Hong Kong national," he said.

"He was charged in relation to the original seizure of the drugs by the Border Force.

"A further three Hong Kong nationals - a 59-year-old man, a 37-year-old man, and a 52-year-old woman - were arrested and charged in relation to the drugs located in the storage facilities."

Mr Keenan said offenders could face life imprisonment over such a large quantity of drugs.

"This is a devastating blow for the organised criminal gangs that peddle in ice and it shows you that if you do target the Australian market, we have the powers and the resources to prosecute you," he said.

"In this case because of the large quantity of these drugs the people involved could be imprisoned for life."