Pope Francis and Russian Orthodox Patriarch Kirill have called for restored Christian unity between the two churches at historic talks in Cuba. 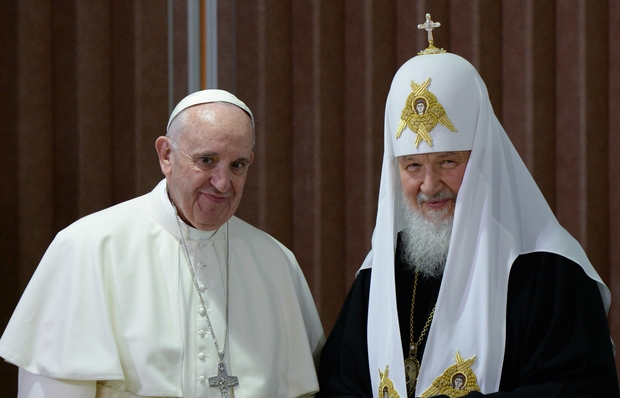 Patriarch Kirill of Moscow and All Russia, right and Pope Francis of Rome. Photo: AFP

The meeting was the first between a pope and a Russian Church head since the Western and Eastern branches of Christianity split in the 11th Century.

In a joint declaration, they also urged the world to protect Christians from persecution in the Middle East.

The pope has now arrived in Mexico for a five-day visit.

A crowd of 300,000 braved the cold in Mexico City to welcome him to the country which has the world's second largest Catholic population.

The pope was greeted at the airport by President Enrique Pena Nieto.

The two-hour talks on Friday (Saturday NZ time) between Pope Francis and Patriarch Kirill were held at Havana airport.

Patriarch Kirill goes on to Brazil and Paraguay.

The pair embraced and kissed each other at the start of their talks."I'm happy to greet you, dear brother," the Russian Church leader said.

At a news conference after the meeting, Kirill said the discussions were "open" and "brotherly", while Francis described them as "very sincere".

"We hope our meeting contributes to the re-establishment of this unity wished for by God," their joint declaration said.

The document called on the world community to defend Christians, saying that "in many countries of the Middle East and North Africa whole families, villages and cities of our brothers and sisters in Christ are being completely exterminated."

"Their churches are being barbarously ravaged and looted, their sacred objects profaned, their monuments destroyed."

Patriarch Kirill has been the head of the Russian Orthodox Church since February 2009, while Pope Francis took up his role in March 2013.

The Roman Catholic Church has more than a billion members worldwide, while the Russian Orthodox Church numbers about 165 million.

The Russian Church is the largest and most powerful in the Orthodox faith, which is made up of a number of separate churches.

The encounter in Havana is not expected to lead to any immediate rapprochement between the Eastern and Western Churches.

Ahead of the meeting, the foreign policy chief of the Russian Orthodox Church, Metropolitan Illarion, said there were still differences between the two churches, in particular on western Ukraine.

One particular issue is the Ukrainian Greek Catholic Church, which follows eastern church rites but answers to the Holy See.