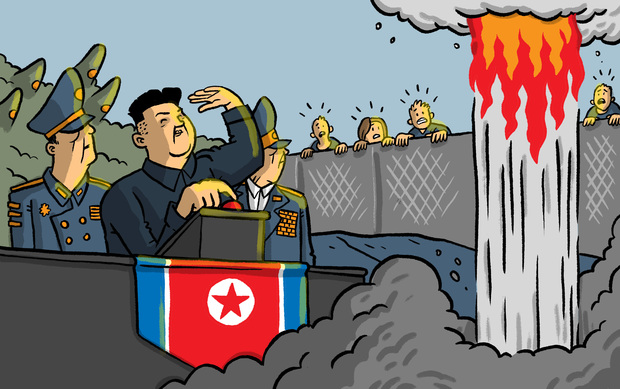 What is this rocket launch of which you speak?

And what's wrong with that?

Plenty, according to the UN Security Council, which convened an emergency meeting and "strongly condemned" the activity. It breached numerous resolutions and confirmed "a clear threat to international peace and security continues to exist, especially in the context of the nuclear test".

What nuclear test is that?

Early last month, Pyongyang trumpeted its fourth nuclear test, which proved the small nation could, it claimed, "wipe out" the United States. In the eyes of much of the world, this latest launch is part of developing a long-distance capability that might deliver a nuclear-armed warhead as far as Europe, the west coast of the US, or Australia.

That's a bit of a daft question.

Sure, but could it?

How does North Korea justify it?

Pyongyang's official announcement heralded "an epochal event in developing the country's science, technology, economy and defence capability by legitimately exercising the right to use space for independent and peaceful purposes".

That, and the fact an ostensibly unrelated announcement by state media the day before the launch warned North Koreans to prepare for a "violent storm".

North Korea would hardly be the only country in the world arming up in the cause of self-preservation.

True. And the US and world powers have been accused by critics of double standards.

What could the satellite be used for?

Pyongyang hasn't said. They have reportedly claimed another satellite, launched in 2012, beams into North Korean households a stream of popular patriotic songs praising the exploits of their leaders.

What will the response be? Beefed up sanctions?

The US may push for tougher sanctions, but they'll face resistance from China. An editorial published by state media agency Xinhua suggests Beijing remains opposed to expanding or enforcing sanctions beyond blocking arms-related materials.

South Korea announced it would enter formal discussions with the US to deploy a missile intercept system, the use of which China opposes.

Aren't they Pyongyang's only serious friend? Can't they get them to stop it?

They tried, reportedly sending an envoy to urge a rethink after North Korea advised a launch was imminent, but to no avail. Some in China believe Xi Jingping has been "humiliated" by Kim, but the president appears determined to avoid creating a hostile neighbour. Public opinion may be a problem, too: 66 percent of respondents in an unscientific poll conducted on the social media site Weibo supported US strikes to destroy North Korea's nuclear programme.

Have you got a link for that?

No. Chinese censors had it removed.

This risks becoming an increasingly sharp point of tension in Sino-US relations, doesn't it?

Whatever happened to the six-party approach?

North Korea walked from negotiations with China, the US, South Korea, Russia and Japan in 2009 after it was condemned by the UN Security Council.

For launching a satellite.

Any reason for the timing of this latest launch?

Pyongyang said it marked the imminent celebration of former leader Kim Jong-il's birthday, while one South Korean parliamentarian said intelligence collected suggested it was designed to coincide with the eve of the Chinese New Year and the Super Bowl.

Does seem odd. Presumably, also, the thing was just ready.

You can never tell with those North Korean dictators. So erratic!

Maybe not so erratic. Their foreign policy approach, like it or not, has remained reasonably consistent over the years.

OK but still, those North Korean dictators! So funny!

On the one hand, yes they are. Kim Jong-Un, his dad Kim Jong-il ("dear leader") and granddad Kim Il-sung ("great leader"), have been lampooned outrageously over the years by the likes of Team America, Stephen Colbert, 30 Rock and - inadvertently - Dennis Rodman. The gags have been fuelled by the appearance and clothing of successive autocrat Kims, as well as the ostentatious and strangely worded pronouncements by the official news agency.

Boasts have included Kim Jong-il sinking 11 holes in one in his first round of golf and Kim Jong-un learning to drive at the age of three.

And the other hand?

On the other hand, there is a danger that laughing about North Korea and the Kims paints the place as a novelty, almost a fictional land, rather than a belligerent dictatorship and nuclear state, and a place described in a 2014 United Nations report that identified numerous crimes against humanity.

"Extermination, murder, enslavement, torture, imprisonment, rape, forced abortions and other sexual violence, persecution on political, religious, racial and gender grounds, the forcible transfer of populations, the enforced disappearance of persons and the inhumane act of knowingly causing prolonged starvation." And: "The unspeakable atrocities that are being committed against inmates of the kwanliso political prison camps resemble the horrors of camps that totalitarian States established during the 20th century."

No. Having said that, some say jokes at North Korean leaders are shared within the country. And mockery - consider, for example, Chaplin's Hitler - doesn't by definition mean minimising the importance.

Is this a third hand?

Let's forget about the hand thing.

A nuclear test and a long-distance rocket launch inside a month have made North Korea seem closer to the west than ever. Over to China.

As simple as rocket science.