Increased air pollution around the world is giving rise to a bizarre new industry known as air farming where bottled fresh air is sold to consumers at a premium. 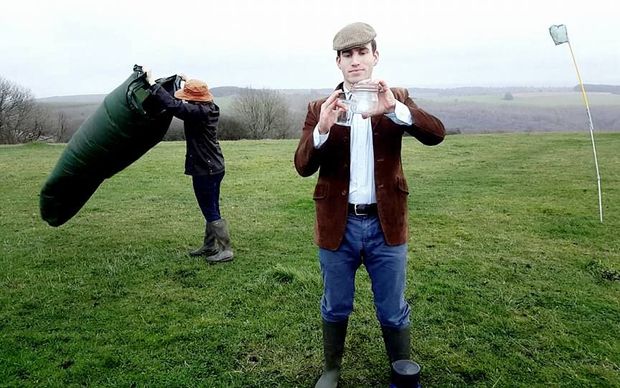 The idea of buying crisp, country air in a jar has proved popular in heavily-polluted cities such as Beijing and Shanghai.

In fact, people are paying upwards of $170 for a single container of air.

Leo De Watts from Britain has jumped on the bandwagon; selling jars of air collected from locations like Yorkshire, Somerset and Wales.

He describes Welsh air as having a "morning dew feel to it" with "vibrant and flavoursome undertones" while air originating from Somerset has "unblemished qualities".

Setting off with a car full of empty jars at 5am, the team "harvests" air in large nets and seals it in the glass jars before shipping it across the world.

Mr De Watts, 27, said he had sold 180 bottles of such luxury air since his business started up just a few weeks ago.

However his company is not the first to put a price on oxygen.

Last year, a Canadian start-up which began selling plastic bags of air as a joke on eBay, realised there was a real market for the product when the air sold for $230.

The company then began bottling air from the Rocky Mountains and selling it in China for 100 Yuan ($NZ23) - 33 more times expensive than a bottle of water - but apparently a fraction of the price of British air.

Suggested times for inhaling an bottle of expensive air are when recovering from a hard night of partying, maintaining focus at school or work or while exercising.

Air pollution in China is at extremely hazardous levels and is estimated to kill an average of 4000 people a day according to a study by Berkley Earth.

An 'Air Farmer' explains the process: