A white Chicago police officer who killed a black teenager is suing his family for $US10 million, claiming emotional distress.

Mr Rialmo says Mr LeGrier swung at him with a baseball bat from close range, but Mr LeGrier's lawyers say the two were at least 6m apart. 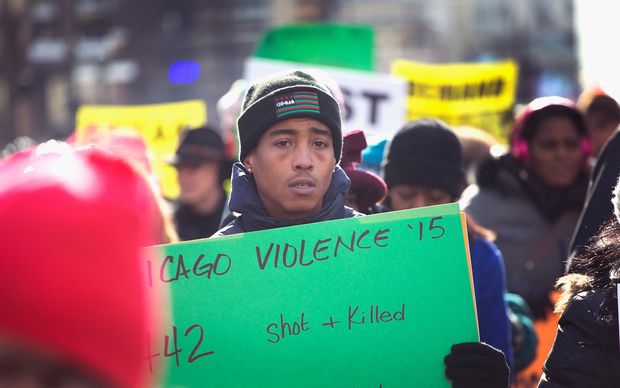 The lawsuit against the teenager's estate was filed amid a federal investigation into Chicago police shootings.

Mr Rialmo's defence lawyer, Joel Brodsky, said it was important in the charged atmosphere to send a message that police were "not targets for assaults" and "suffer damage like anybody else".

The teenager's father, Antonio LeGrier, filed a wrongful death lawsuit days after the shooting, saying his son was not armed with a weapon and was not a threat.

His lawyer, Basileios Foutris, said Mr Rialmo's lawsuit was "a new low even for the Chicago Police Department".

"First you shoot them, then you sue them," he said.

The officer's lawsuit says Jones' death was LeGrier's fault, not his.

Mr Rialmo, who was responding to a domestic disturbance call, says Mr LeGrier came charging at him down the stairs and swung a baseball bat at his head. Mr Rialmo says he backed away and shouted at Mr LeGrier to drop the bat, but drew his weapon and fired after the teenager swung the bat again.

Mr Rialmo fired six times, killing both Mr LeGrier and Bettie Jones, a neighbour who was standing behind the teenager.

"The fact that LeGrier's actions had forced Officer Rialmo to end LeGrier's life and to accidentally take the innocent life of Bettie Jones has caused, and will continue to cause, Officer Rialmo to suffer extreme emotional trauma," the lawsuit says.

Lawyers for Mr LeGrier's father and for Ms Jones say evidence indicates the officer was 6m to 9m away when he fired.

The LeGrier family's lawyer also questions why the teen would attack the officer since he was the one who called police.

"If you're calling multiple times for help are you going to charge a police officer and try to hit him with a bat? That's ridiculous," Mr Foutris said.

County prosecutors have asked the FBI to investigate the shooting. The Chicago Police Department has refused to comment.

The federal investigation into Chicago's police is focusing on the use of force by officers and the department's accountability procedures.

It was launched after weeks of protests over the police killing of a black teenager by a white officer.

Laquan McDonald, 17, was shot 16 times in 2014 by the officer, who was charged with murder over a year later.

The inquiry will take a similar form to those recently conducted in Baltimore and Ferguson, Missouri - as well as more than 20 other departments in recent years, and will look for systematic violations of US civil rights laws.