A leopard which entered a school in the Indian city of Bangalore injured six people trying to capture it.

A scientist and a forestry employee were among those mauled during the near 10-hour long effort to corner the dangerous animal on Sunday. 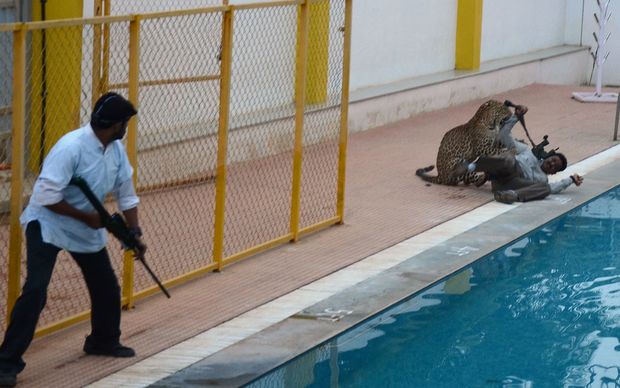 Six people were injured after a leopard entered the Bangalore school Photo: AFP

The leopard, which strolled into the Vibgyor International school, was eventually tranquillised and released.

A recent wildlife census estimated that India has a leopard population of between 12,000 and 14,000.

The eight-year-old male was spotted strolling inside the school premises in the Kundalahalli area.

Footage on the school's security cameras showed it attacking a man near a swimming pool. 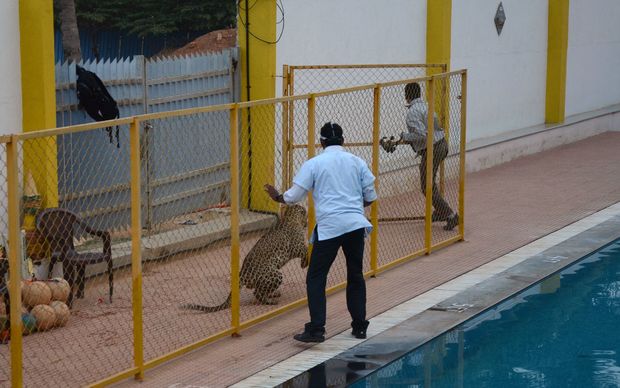 The animal was eventually tranquillised and released Photo: AFP

Conservation scientist Sanjay Gubbi and forest department employee Benny Maurius were injured when they tried to corner the animal and tranquillise him, reports say.

"It was a long struggle to capture the leopard. Although it was injected with tranquillisers it could be captured only around 20.15 local time when the medication took full effect," senior police official S Boralingaiah told reporters.

Wildlife official Ravi Ralph told the BBC Hindi's Imran Qureshi that the leopard possibly strayed into the school from a patch of forest not far from the school.

The captured animal has been moved to a national park and the six injured people, including a cameraperson of a TV channel, have been treated for minor injuries.

Leopards and other big cats have been known to stray into populated areas, and conservationists have warned that such confrontations may increase as humans encroach on animal habitats.